Jones talks FIRST STEP Act and turning his political rivals into partners: "I will work with anybody to get our people free." 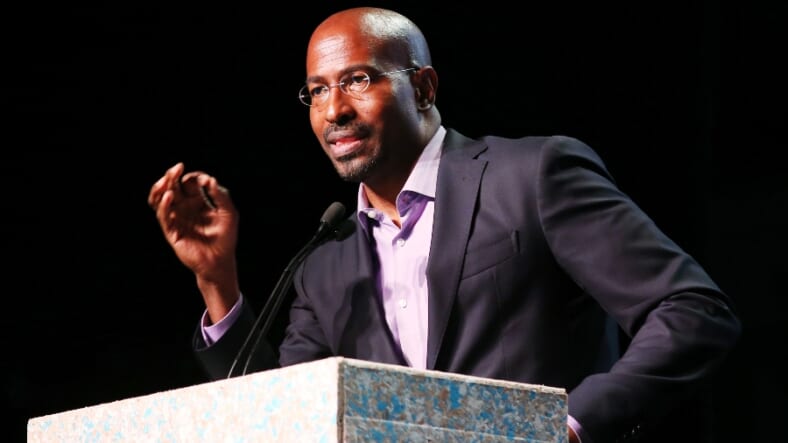 In an exclusive interview with theGrio, CNN commentator and activist, Van Jones, responded to criticisms that he’s been too cozy in his approach to the Trump administration and his unwavering support of the FIRST STEP Act.

“Let me just be clear about how hard this has been,” Jones told theGrio. “Y’all forget, the first thing Jared Kushner did when he got in office was ask for Van Jones to be fired from CNN. Don’t forget Jared tried to take my job personally. Don’t forget, when I was working for Obama, Mike Pence was the first person to come out and demand that Van Jones resign because he was too radical.”

READ MORE: Parents outraged after racist bully targets daughter at Christian school ‘He said he would sell me into slavery

Jones compares his situation to that of Dr. Martin Luther King Jr.‘s work with his former political rivals and the openly bigoted President Lyndon B. Johnson on the historic Civil Rights Act of 1964.

“People who are locked up deserve an advocate no matter who the damn President is,” Jones expressed to theGrio. “You’ve going to tell me that I can’t advocate for my people until Democrats figure out a way to win some elections? And then when they win the election are they really going to put us first? Have they been putting us first? Did Bill Clinton put us first?”

Why is FIRST STEP such a big deal?

The FIRST STEP Act has been called the “biggest breakthrough for criminal justice in a generation” by The New York Times and promises to reduce federal prison sentences, increase access to education programs and incentives for good behavior, keep prisoners within 500 driving miles of their families, stop shackling pregnant women, and reduce the age elderly prisoners are eligible for compassionate early release.

In what some have called a Christmas miracle, debate over the FIRST STEP Act started on Monday in Congress and will be brought to a vote later this week. Despite outspoken critics like Republican senators Tom Cotton (R-AR) and John Kennedy (R-LA), supporters remain optimistic the bill will pass.

FIRST STEP has the support of diverse and politically mixed coalition groups including the ACLU, Kappa Alpha Psi, Inc., the American Correctional Association and The Sentencing Project, to name a few. (A full list of sponsors and partners is located here.)

“We have to be smart and we have to be a sophisticated as the system that we are fighting,” Jones said, referring to the bipartisanship aspect of the political strategy on the issue. “African-Americans have to stop playing tic tac toe and losing. We got to start playing chess and winning.”

“African-Americans have to stop playing tic tac toe and losing. We got to start playing chess and winning.”

Critics, however, have pointed out that the FIRST STEP Act only addresses those in federal prisons— a population of approximately 180,000 prisoners which pales in comparison to the 2.5 million people in local and state prisons nationwide.

The bill also leaves out offenders who committed violent crimes, which many argue are most in need of the “good time credits” offered to prisoners who complete educational and rehabilitative programs.

Other skeptics have noted that Jared Kushner’s father once did federal prison time, which makes this criminal justice reform project a personal one for Trump’s son-in-law and yet another example of nepotism and political favoritism at work in the White House.

“You say ‘Well, Donald Trump only does things for racist, negative reasons,'” Jones responded. “I don’t care what reasons a politician does anything. I want every politician in America to try to figure out how to roll back mass incarceration as opposed to how to lock up more of our people.”

Jones acknowledged that skepticism of President Donald Trump from communities of color is valid, but says his activism is centered not on Trump, but the estimated 3,000-7,000 prisoners who could be released from prison early if the FIRST STEP Act i eventually signed into law.

Jones credits the Black Lives Matter movement with laying the societal groundwork for the FIRST STEP bill to exist.

“We should be proud that Black Lives Matter has changed the conversation to the point that everybody had to deal with the issue,” Jones told theGrio.

His next goal is looking to 2020, a year where mass incarceration is expected to be an important issue to voters.

“I don’t want any party running Willie Horton ads in 2020. I want both parties to run and say how they’re going to put fewer people in prison. And give people second chances. And we can do that if we keep moving. First step, second step…all while move forward.”

Watch the full interview with Van Jones above and tell us what you think about criminal justice reform in the comments below.