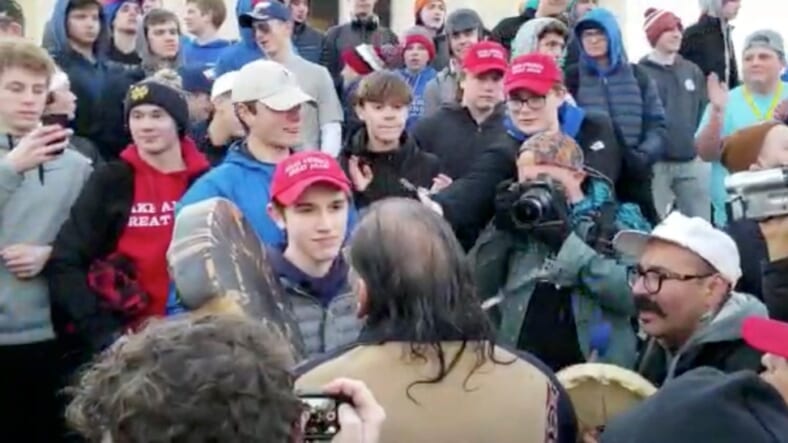 In this Friday, Jan. 18, 2019 image made from video provided by the Survival Media Agency, a teenager wearing a “Make America Great Again” hat, center left, stands in front of an elderly Native American singing and playing a drum in Washington. The Roman Catholic Diocese of Covington in Kentucky is looking into this and other videos that show youths, possibly from the diocese’s all-male Covington Catholic High School, mocking Native Americans at a rally in Washington. (Survival Media Agency via AP)

A white teen whose face went viral following video of him smirking at a Native American man during a demonstration in Washington D.C. that turned into a standoff, is adding to his list of multi-million dollar lawsuits.

Nick Sandmann, 16, a Covington Catholic High School student, and his family has filed a $275 million lawsuit NBC Universal. According to Talking Points Memo, the family alleges that it defamed Sandmann in its coverage of the protest by “relying heavily on biased and unreliable sources without conducting any reasonable investigation of the circumstances.”

It all stems from an incident where Sandmann and his classmates were in Washington taking part in a pro-life rally on the National Mall in January. During the protests there were clashes with several groups including the Black Hebrew Israelites and Native Americans, but viral video caught the latter. In the now infamous video, young white students in “Make America Great Again” hats were chanting while Nathan Phillips, a Native American man from Michigan, was singing. In the footage Sandmann is seen in the very front smirking in Phillips’ face as he continued to sing.

Sandmann, his classmates and school soon came under fire for their actions that day and it did not take long for Sandmann and his family to start litigating. Currently, there is lawsuit from his family pending against the Washington Post for $250 million and another against CNN for $275 million. Talking Points Memo reported that Trump has cheered Sandmann and his family for the lawsuits, tweeting after the family filed the suit against the Post to “Go get them Nick.”

According to the website, Covington High School conducted its own investigation of the incident and concluded the students were not to blame. Sandmann continues to blame the Black Hebrew Israelites for brewing up tension during the protests and claimed that he and his classmates were only trying to drown out the group with their chanting. The group, however, dismisses the claim.