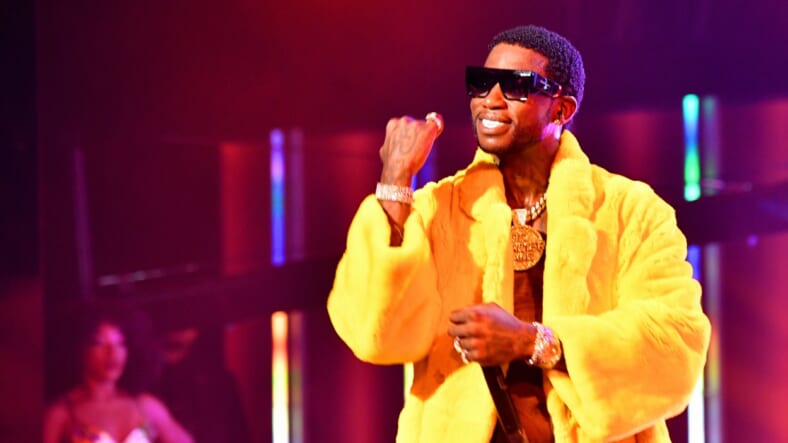 Over the past few years rapper Gucci Mane has done an amazing job rebranding himself, thanks in large part to his new commitment to health and fitness, and shows of public adoration for his longterm-girlfriend-turned-wife Keyshia Ka’oir.

But now it appears that just because a brother eats healthy and finally wife’s up his “ride or die” chick, doesn’t necessarily mean he’s done the internal work it would take to honestly call him a changed man.

In fact, thanks to an interview he recently did with Charlamagne Tha God, it appears that old, problematic, reckless Gucci Mane is still lurking in there somewhere behind those six pack abs we’ve all been applauding lately.

Let’s start from the beginning

For those of you who haven’t previously heard about the beef between Gucci and The Breakfast Club hosts Angela Yee and DJ Envy, it all stems from a previous — now infamous — interview in 2016.

During that appearance on The Breakfast Club, the “Beat It Up” rapper brazenly asserted that Yee tried to have a sexual relationship with him. When Yee vehemently denied this on-air, not only was the rapper visibly irritated, it also sparked rumors that she had him banned from ever returning to the show.

Earlier this month, during a segment called “Club Court,” Envy and Yee chose to address these blackball speculations. Seemingly in good spirits, Yee clarified that Gucci was never banned from The Breakfast Club. She then pointed out she didn’t even have his number and outlined a slew of discrepancies in his claims which made his account of the day in question easy to disprove.

She also mentioned a rep for the rapper had recently approached her privately, stating he wished to apologize for his previous antics. But she insisted that since he humiliated her publicly she felt it only right he apologize publicly as well.

Unfortunately, Yee’s reasonable unpacking of the situation is all it took to set Gucci off and get him to (rather quickly) regress into the guy we all thought he’d left behind.

He’s got a big ego

In response to the segment, Gucci decided to take his grievances to Charlamagne, the only host of the show who he seems to not be upset him with at the moment

“I’ma confront him about what he and Angela did,” Gucci said, referring to the part of “Club Court” where DJ Envy read the rapper’s 2013 Twitter rant.

In that tirade the rapper claimed to have had sex with almost every popular woman in the music industry, which shows Yee isn’t the only person he’s done this to. Although every word read during that segment was written by Gucci himself, having his past thrown on his face appeared to set him off.

“If he come at me wrong, I’ma slap the s**t out him…. It ain’t gonna be his first time getting slapped,” he continued.

Then at one point Gucci refers to Yee as, “that punk-ass bitch,” then adds, “And DJ Envy, he’s a pussy, too. Envy is pussy, pussy. He’s scared.”

Many fans online were dumbstruck by the belligerent display. Some even wondered aloud why a grown man, who is successful, happily married, and experiencing arguably the happiest chapter of his life, would choose to fuel a dispute as petty as this.

But unfortunately to some of us this behavior isn’t some big mystery or even an anomaly. In fact, it’s a pretty standard example of what fragile masculinity (often referred to as “toxic masculinity”) looks like in action.

Yee’s biggest sin, was not letting a prideful man, whose done a lot of unsavory things in his past, crack a slut shaming joke at her expense. That’s it. That was her capital offense that spawned this three year “beef” that reads more like a one sided tantrum from a brother who doesn’t know how take an L.

There is speculation that the true reason he’s mad at The Breakfast Club hosts is because they did an interview a while back where fellow rapper Yo Gotti claims he had a sexual relationship with Gucci’s wife  prior to them tying the knot.

In response to feeling like his manhood was threatened by having another man claim that he slept with his beloved, I guess ole boy figured, “Well fine, then I’ll just say I smashed Angela Yee then!”

I won’t go so far as to call this bullying, as that’s a word I feel we conjure up way too flippantly when the true application of it is nothing to make light of. But I will say that I suspect Gucci looked at Yee’s laid back persona and mistook it for weakness.

What he didn’t seem to bank on though is that instead of being the “punk ass bitch” he’d hoped her to be, Yee instead turned out to be a shrewd businesswoman, who not only refused to be demeaned, but also had a file cabinet of receipts to bury him under.

As a result, now Gucci is working overtime to undermine a reputation she’s spent over a decade building while also threatening to slap her male co-worker… simply for reporting the facts!

It’s a shame, that even after all those gym selfies, a rack of endorsement deals, and a star-studded wedding that many hailed as “relationship goals,” Gucci still can’t find it in his heart to grant women the same grace and respect his fans have given him since he was released from prison.

I know this is the day folks online often celebrate as “Transformation Tuesday” but appears in this instance, the improvements may have only been skin deep.