EXCLUSIVE: Vice President Kamala Harris has invited the Black women protesters and activists to the White House for a meeting on Friday to talk about voting rights.

Police officers on the Hill arrested 10 Black women in the Senate Hart Building including Democratic Rep. Beatty of Ohio and Melanie Campbell of the Black Women’s Roundtable. The women were transported to Capitol police holding in vans. Their jail conditions included a community toilet in the cell resembling those of county lockups across the country.

According to Mallory, Campbell’s organization, National Coalition on Black Civic Participation, made sure all the women were financially covered for any arrests and subsequent bail money. The NAACP also exclusively told theGrio, they will financially help with the release of those arrested.

Rep. Beatty and Campbell are now out of custody. Mitch Landrieu, the former mayor of New Orleans, greeted Campbell on the other side of her processing. Landrieu said he’s “grateful” to the protestors for their action.

Others on hand for the protest entered the building singing with civil rights leaders and the congressional members but were not arrested nor handcuffed with zip ties. Tamika Mallory, LaTosha Brown of Black Voters Matter and former Washington First Lady Cora Masters Barry remained vigilant and close by as those arrested were loaded into vans on the other side of the Senate office building. 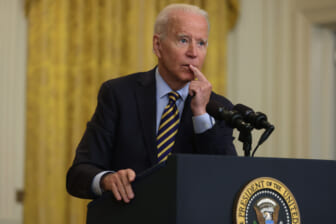 “For those of us who were not able to complete the civil disobedience, we will certainly be back,” Mallory told theGrio. “We will continue to organize and I think our goal is to make sure people around the nation see us, and they see the work we are doing; and they see the sacrifice and we begin to replicate these actions in the local districts of those, including Democrats, who are obstacles to justice.”

In response to theGrio breaking the news, the NAACP President Derrick Johnson said on Twitter, “It’s a shame that this is still the price you pay for defending democracy!”

Sherrilyn Ifill of the NAACP Legal Defense Fund added, “This moment is critical.”

Other politicos like former Obama Education Secretary Arne Duncan chimed in on Twitter as well. “Really interesting what we arrest folks for everywhere including the Capitol,” Duncan wrote.

“We were compliant,” Brown explained, adding, “They asked us to leave the premises because we were singing and chanting.”

Vice President Kamala Harris invited the Black women protesters and activists to the White House for a meeting on Friday to talk about voting rights. The meeting will last an hour with about 20 of the women. Those attending will reportedly include the National Coalition on Black Civic Participation and LaTosha Brown.

In Philadelphia, on Tuesday, President Joe Biden called on Congress to “act” on voting rights as we are now voting without the full protections of the Voting Rights Act of 1965. Thursday’s demonstration on the Hill is a public response to the president’s request of the American people.

Tina Tchen, the head of Time’s Up, at the White House this week saluted the resilience and leadership of Black women. “Black women have led the way. They’re leading the way on so many issues that are critical on caregiving, on voting rights,” Tchen said.

“Stay strong, stay strong. And we at Time’s Up stand with you. And, you know, by staying strong, that is how we are going to change the world.”