EXCLUSIVE: As chairman of the U.S. House Select Committee probing the Capitol attack, Thompson tells theGrio he sees his job as a mission to “reinstall Democracy” in the United States.

The one-year anniversary of the Jan. 6 insurrection is a very sobering moment for U.S. Congressman Bennie Thompson, the top power broker in the hunt to find and hold those accountable who funded and waged war on the United States Capitol.

Thompson, the head of the U.S. House Select Committee to Investigate the January 6th Attack on the United States Capitol, is quite literally the face of the effort to seek justice against the pro-Trump mob that committed a deadly attack on the nation’s election system and democratic norms.

In an exclusive interview with theGrio, Rep. Thompson said he sees his job as chairman of the crucial committee as a mission to “reinstall Democracy” in the United States.

“A Black man from one of the most racist states, as it relates to voting rights for people of color, is now having to defend democracy in the greatest Democracy known to man – it’s kind of ironic,” said Thompson, who has represented Mississippi’s 2nd district since 1993.

Months into their investigation, Congressman Thompson acknowledged to theGrio that he and the committee co-chaired by Republican Congresswoman Liz Cheney of Wyoming, are building a list of those who funded the event that led up to the deadly insurrection. 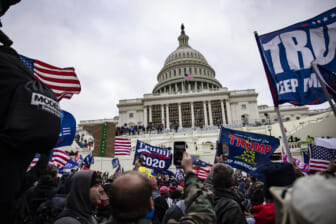 The list is believed to include names of people the public has heard of and those we have not. There are some reports of money being collected and kept by some people who claimed to work for pro-Trump event on Jan. 6. Thompson, who also serves as chairman of the U.S. House Committee on Homeland Security, would not disclose the names in fear of jeopardizing the committee’s important work.

In what will likely go down in American history as one of the most important moments of his political career, Thompson couldn’t help but reflect on the juxtaposition of his powerful role investigating a modern attack on the U.S. government and the racial and political history of his home state, where its local government initially refused to enforce the watershed Voting Rights Act of 1965 after its passing.

“It’s unbelievable because it was my government that had to come south to install democracy here because white southerners were depriving Black southerners of their ability to register and vote and select the candidates of their choice,” said Thompson.

“And so you’ve come full circle with somebody like me who is only in office because of the Voting Rights Act, who only represents a district that was born out of voting rights litigation. So now, I have to help defend this democracy against some of those same people who wanted to deny me and my parents the right to vote because that same mindset is what allowed people to believe that they could break into the United States Capitol and stop the orderly certification of the election.”

He added, “And somehow they don’t see themselves as breaking the law. Those same Klansmen who burned churches, who did all those dastardly deeds in their minds back then thought they were not breaking the law [and] that they were protecting and preserving their way of life.”

Thompson, a lifelong member of the NAACP, is credited with helping register Black people to vote during that very dangerous and racially charged moment in history.

“[Bennie Thompson] witnessed and experienced levels of domestic terrorism in Mississippi. What we witnessed on January 6 is familiar for Thompson,” NAACP President Derrick Johnson told theGrio.

“January 6 was when you allow white supremacist behavior to go unchecked in the White House. This is what we get,” he added, referring to the actions of former president Trump.

Johnson and Congressman Thompson together led a lawsuit filed last year that uses the nation’s oldest civil rights law, The Ku Klux Klan Act of 1871, in an attempt to hold Trump and others involved with the Jan. 6 attack accountable. Thompson decided to remove his name from the lawsuit to avoid any conflict of interest in the case that is still underway after House Speaker Nancy Pelosi named him as the head of the Jan. 6 select committee.

Congressman Thompson is hard on the case as he was one of the many eyewitnesses to the Jan. 6 attack. He recalled being in gallery of the Capitol building when the thousands of Trump supporters and insurrectionists scaled the walls, broke windows, utilized bear spray and did some of the most unimaginable things in their pursuit of stopping members of Congress from certifying the Electoral College vote that would name Joe Biden as the 46th president of the United States. 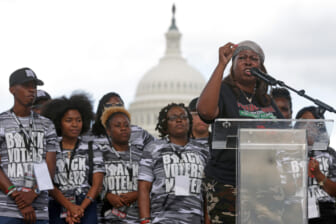 “I was aware the Stop the Steal rally was going on at the Ellipse a couple of miles away from the Capitol, but you know, we are kind of used to demonstrations in Washington because we are kind of the citadel of democracy where free speech and expression is what we are accustomed to,” Thompson recalled to theGrio.

“But not in my wildest dreams could I have imagined that people would break into the United States Capitol ostensibly to stop the orderly certification of an election that had already occurred two months ago.”

Thompson reminds that the actions of the pro-Trump insurrectionists was “perfunctory.” As he and everyone else who didn’t believe Trump’s Big Lie sees it: “The election was over. Donald Trump had lost.”

Thompson is clear in the moment to moment of that day when he saw members with security details being escorted from the floor without anyone saying why. Then Thompson saw members moving furniture to “guard the doors.” He had no access to information at the time as he was watching the process from above in the gallery.

The Mississippi congressman realized when it was essentially too late as someone said, “they have broken into the Capitol.” He remembers it was about “15 minutes” before the lawmakers were told what to do to protect themselves.

Wednesday, on the eve of the anniversary of the Jan. 6 attack, Attorney General Merrick Garland vowed that the U.S. Justice Department stands committed to hold anyone involved in the deadly riots “accountable.” Garland reminded the world of the words of the late Supreme Court Justice Antonin Scalia, who had written in a previous decision, “True threats of violence are outside of the first amendment.”

In the United States Senate, the attack on the Capitol and its link to the need for federal reform for voting rights was the focus of a “Dear Colleague” letter from Senate Majority Leader Chuck Schumer. The New York Senator said, “January 6th is a symptom of a broader illness – an effort to delegitimize our election process and the Senate must advance Democratic reforms to repair our republic or else the events of that day will not be an aberration-they will be the new norm.“

As Thompson’s select committee work continues, there is great confidence in his ability to get the job done through the committee’s methodical investigation.

“His experience and leadership displayed in the findings and actions of the January 6th House Select Committee is on par with the standard of excellence Chairman Thompson delivers as Homeland Security chair,” said Beatty.

“Nearly a year later, the vile attack on our Capitol has long-standing and lingering consequences which continue to highlight the fragility of our democracy. The Congressional Black Caucus and the American public extend our continued support for Chairman Thompson’s leadership of the House Select Committee on the January 6th Attack to uncover the full truth of that day, bring those responsible to justice, and to ensure we never experience a day like that again.”

“Chairman Bennie Thompson is the right man, at the right time, with the right skill, ability and temperament to investigate the January 6th coup attempt,” Democratic Caucus Chair U.S. Rep. Hakeem Jeffries said in a statement to theGrio. “Under his sage leadership, I am confident that the Select Committee investigating the violent effort to overthrow the U.S. government will uncover the truth, the whole truth and nothing but the truth. That’s not simply the American way. It’s the Bennie Thompson way.”