BREAKING: The two-time Grammy-nominated rapper is being accused of shooting at someone in Los Angeles on Nov. 6.

A$AP Rocky was detained at Los Angeles International Airport (LAX) on Wednesday in connection to a shooting in the fall of last year. The Harlem rapper was traveling to L.A. from Barbados, where he and singer/entrepreneur girlfriend Rihanna were vacationing, as reported by NBC News.

Rocky’s arrest stems from an investigation by the Los Angeles Police Department (LAPD) over a shooting that took place on Nov. 6, 2021. The shooting was not disclosed to the media until now. Rocky’s lawyer, Alan Jackson, confirmed his arrest, according to NBC News. 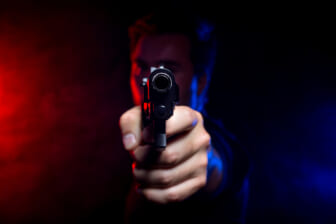 The shooting victim alleges that around 10:20 p.m. that evening, Rocky, real name Rakim Mayers, approached him near Vista Del Mar and Selma Avenue and shot at him three to four times. The victim states that one of the bullets grazed him in his left hand.

Rocky, a two-time Grammy nominee, made headlines in 2019 when he was arrested and detained in Stockholm, Sweden after being accused of attacking two citizens while visiting for a performance. He was detained in early July and released in August.

Rocky maintained his innocence, and video footage showed that he and his entourage were provoked before getting into the altercation with the accusers. The 33-year-old was convicted of assault, but was given a suspended sentence and ordered to pay $1,000 in damages.

Details of his ordeal were chronicled in the 2021 documentary, Stockholm Syndrome, premiering at the Tribeca Film Festival.

More details into Rocky’s Wednesday arrest are to come as the story develops.