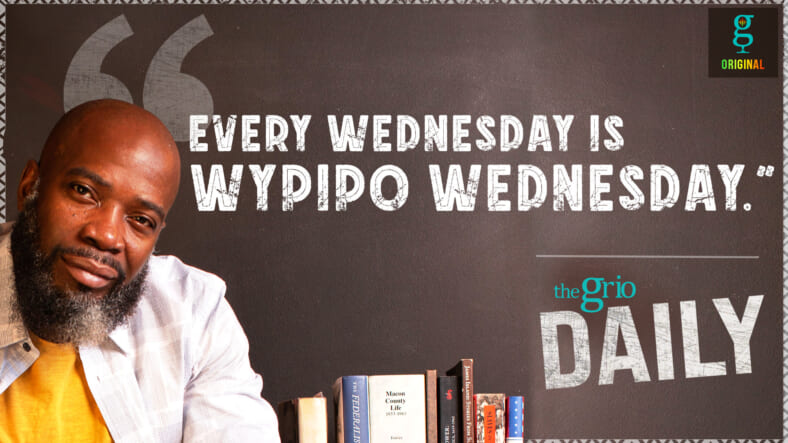 Every Wednesday is Wypipo Wednesday

Self-proclaimed Wypipologist Michael Harriot explains exactly what is  “Wypipology” and how it’s been all around us since the beginning of time. TheGrio Daily is an original podcast from TheGrio Black Podcast Network.  #BlackCultureAmplified.

TRANSCRIPT: My name is Michael Harriot. I’m your favorite wypipologist. And I’m here every day to tell you about what’s going on in the village. But, you know, theGrio. We really do believe in diversity and inclusion, and that’s why we have white people Wednesdays. Every Wednesday, we dedicate to our favorite white subject. We explore the world that is whiteness. Because this podcast would never exclude a group based on color, creed or race, or how they season their food. We would never do that. And so today is white people Wednesday, when we explore what’s going on in the white jungle out there.

Today’s class is a class in wypipology. I know a lot of you have heard me call myself a white people. I just wonder, what does that mean? Well, today we’re going to explain that in a class called Wypipology 101.

I’m Michael Harriot, world famous wypipologist. And this is The Grio Daily.

I know you’re wondering what the hell is wypipology? Well, Dictionary.com and Urban Dictionary both define wypipologist as a humorous slang term for someone, usually a black person who studies white people or white people. White people, after all, do some crazy stuff in need of expert explanation. While Dictionary.com mentions who is responsible for coming up with this term? Some dude named Michael Harriot. They kind of got it wrong. Let me explain. See, I was raised in a majority black neighborhood and a majority black family. I do have an aunt named, Rebecca. So technically, there’s a Becky in my family. I don’t know how that happened. And I was home schooled. So basically until I was 12 years old, I was surrounded by blackness. And when I got into the American education system, my first teacher was a woman who lived around the corner from me named Miss Sellers. Ms. Sellers was a miniature little black woman who always smelled a little bit like cinnamon candy cane and openly prayed for her students after the Pledge of Allegiance every day. And in case you’re wondering, nope. Because of the public school system’s astonishing lack of anointing oil. I only pledge allegiance to Jesus Christ. My King of kings, Lord, Lord, the bright morning star. Oh, and Muhammad Ali. See, Miss Sellers. She had been teaching so long, but she also taught my mother back in the day before schools in my hometown were integrated. Now, I should probably mention here that my school district wasn’t integrated until 1995. So Ms. Sellers, she somehow understood that I was a fish out of water and she handled me with kid gloves. Now I want to say that it was because she noticed so much potential in me. But I mean, let’s be honest, I think it was because aside from my friend Monique, I was the only black person in her class. And Monique, she was a tomboy, new to the school, and she lived a block away from me. So we became like best friends. Now, Monique’s parents was in the military, so she had to go to a lot of schools. So she basically, like, guided me through the American education system because I didn’t know what I was doing. I was home school, remember? And we sat in the same role for every class, me in front and her behind me now at my school, instead of changing classes, the students, they stayed in one class all day and then the teachers, they switched classrooms. And Ms. Branson, a young white lady, she taught her social studies every afternoon. And Miss Sellers, she held down the rest of the subjects that even though other teachers came to our classrooms, you know, like the art teacher and music teacher, we were technically called Miss Sellers class.

So one day, as soon as Miss Brinson walked into class, before Miss Sellers even had a chance to leave from behind me, Monique mumble just loud enough for me to hear. Well, I guess it’s time to learn what it was like before black people found out about America. And so, you know, I had to crack a joke. I was like, you know, white people think black people were invented in 1865. And I don’t even know if Monique really got it, but she cracked up anyway. It was probably the words white people that made her, you know, giggle behind me. But Miss Branson she did not get it. She definitely heard it. And she says, “What did you say, Michael?” I was just like, clear my throat, you know, I was trying to think of something to say. And then I said it again. You know, white people don’t think black people were invented until 1865. Now. Because I had spent the first decade of my life in a cocoon that left me unaffected. By what? Because I’d never been concerned with whiteness. I never intentionally tried to make white friends as I know the white people. My real education wasn’t steeped in the narrative of white supremacy, the need for white people’s acceptance or assimilation, were concepts that had escaped my notice.

[00:15:53] And as always, turn to your neighbor and say, neighbor, you need to listen to the Grio Daily. We’ll see you tomorrow. We out. Thank you for listening to The Grio daily. If you like what you heard, please give us a five star review. Download the grio app. Subscribe to the show and share it with everyone you know. Please email all questions, suggestions and compliments to podcasts at the Grio.com. The Grio Daily Podcast is an original production brought to you by the Grio’s Black Podcast Network.