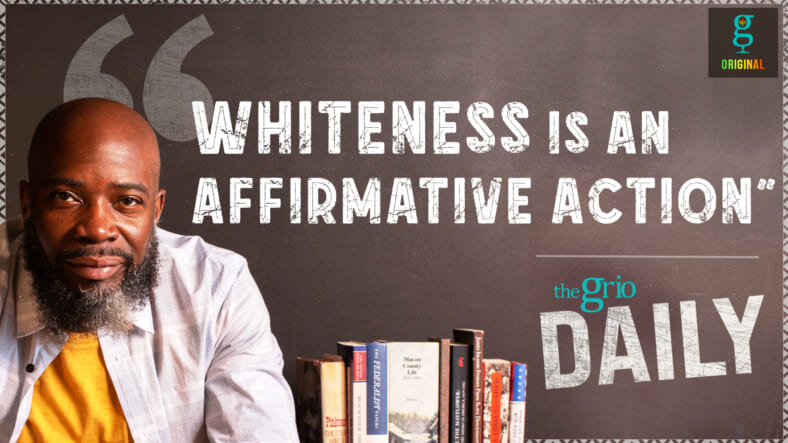 “Whiteness is an affirmative action.” Michael Harriot debunks the myth that if Black people work hard they can get everything white people get.

Michael Harriot: Hello and welcome back to another episode of theGrio Daily, the only podcast that mixes Kool Aid without a measuring cup. Nah, we don’t need no measuring cup. We pour the sugar into the pitcher until the ancestors speak to our heart and tell us to stop. And today, you know what I want to talk about? This, like, crazy idea that we hear about all of the time. It’s called merit. Today, we’re going to talk about the merit myth, specifically about affirmative action. I know you’ve probably heard about affirmative action. You’ve heard about it demonized. You’ve heard about it being vilified by white people because, you know, it’s a key element in that white replacement theory that we’re going to be talking about in a few episodes. I’m Michael Harriot. World famous wypipologist and this is theGrio Daily.

Michael Harriot: Today, we’re just going to talk about merit because of all the things that white America ever had and just kept out of the reach of Black hands. We weren’t really that concerned with money. You know, power, justice or equality has never really been like the ultimate goal. Black people do not desire to be equal to the oppressor. And we don’t expect justice from practitioners of injustice. Like we don’t think white people can just automatically manufacture justice after they’ve been not doing it for 400 years. It was the prospect of opportunity that got us to participate in the whole civil rights movement. We didn’t want to go to school with white people. We wanted to go to the schools that gave us the best opportunity to achieve. And that was not necessarily white schools. It was the schools that we were paying for, the schools in our communities, the school that our tax dollars were funding. That’s where we thought that we should be able to get our opportunity. We didn’t want to sit next to white people on busses. We wanted the opportunity to sit wherever a seat was open on a bus or a train or in a diner. That’s what the civil rights movement was about, not like getting next to or being equal to white people. Nat Turner picked up a machete because he wanted the opportunity to breathe free. Black Lives Matter simply fights for Black people’s opportunity to breathe.

Michael Harriot: Now, nowhere is this fact more evident than in the field of education. Education is like the real place where we see this merit myth starting to take place. Right? It’s more than just mathematical theorems and syntax diagrams. It’s about preparing for opportunity. And historically and currently, it’s been kept out of the reach of Black people simply because of the color of their skin. Now, there is no debate about this. The average white student attends a school that is funded at $2,226 per student, more than the average majority Black school. And two thirds of Black children go to majority Black schools. And these are high poverty schools. Matter of fact, high poverty, majority white schools are better funded in this country than majority Black schools in majority Black rich neighborhoods. I mean, it’s just the fact the education system is racist and has so many things that we could point to. For instance, majority Black schools have smaller libraries, fewer books, right? Less technology kids, the smartest kids at majority Black high schools can’t attend AP and International Baccalaureate classes because they don’t have those resources. There’s so many disparities in the education system. But in this country, we believe that if you work hard and studying and put yourself through the education system, you too can achieve. And that’s what they think merit is.

Michael Harriot: And lately there’s been a debate about how we correct this inequality using affirmative action that sometimes includes race conscious admissions policies. There’s been this huge debate about the efforts to correct this inequality in education, specifically as it relates to affirmative action now. Harvard uses race in its admissions. Right. And people refer to that as affirmative action. Right. And so Asian American applicants, they sued Harvard because they said they were discriminating against Asian-American applicants. And what they said was like, we have higher SAT scores than, you know, some of the Black students and some of the non students you let in. Now, if you’re going to let those students in who are quote unquote lesser students than the Asian-American applicants, then affirmative action is racist against Asians. Now we’re going to get to why that is some total B.S., But conservatives, the people who believe in reverse racism, they push that narrative. Right. And then Donald Trump, like supported it. He wanted to end affirmative action, especially in college admissions, because according to white people, that it dismantles the idea of merit and it’s a form of prejudice against white people. Now, Fox News is one of the biggest opponents of affirmative. So they always pushed this narrative that race conscious admissions policies discriminate against white people and don’t says my word. I mean, you can see for yourself.

Fox News: I wonder what would be wrong with looking at bias against white students. That would be okay. Right. I found the framing on this a little weird. The assumption at the beginning that this was an appalling thing. Okay, well, if there’s bias, we should investigate bias wherever it is. That’s fine. If you have a civil rights division, then have a civil rights division for all all of the humans. That’s good. And then and then the response from the administration of like, aha, it wasn’t on behalf of white students.

Tucker Carlson: The other factor that colleges don’t like to talk about is affirmative action. The Supreme Court banned the use of racial quotas in admissions some years ago, but in real life, that decision meant nothing. Skin color remains a central consideration at every level of the process. The average admissions officer’s every bit as race conscious as any institution in the Jim Crow South and far less transparent about it.

Michael Harriot: So the question is, are they lying to race conscious admissions policies level the playing field, or did it give Black students an unfair advantage over white students or universities trying to promote diversity and equality? Or is it reverse racism? Well, even worse is this the white replacement theory and the white genocide we keep hearing about who? Spoiler alert everybody know before we get into this discussion. There are four arguments that we should throw out before we begin. One, affirmative action is a quota system. Now, there are many different versions of affirmative action, but the Supreme Court has specifically outlawed the use of racial quotas in 1978. Then in 2009 and then again in 2014, institutions are allowed to use race as a factor. But setting aside a specific number of slots for Black people, that ain’t allowed, right? So they can’t say, well, we’ve got 100 openings. We got to give 20 of them to Black people. Now, the second myth is that people of color benefit the most from affirmative action. That’s not true. In almost every category, white women have been the biggest beneficiaries of affirmative action, despite their overwhelming dislike in almost every where affirmative action is enacted. Non-Hispanic white women see the biggest leaps in pay, employment and college acceptance, even in cases like Harvard, which is accused of limiting the number of Asian-Americans, according to The Washington Post. It is white men who fill these slots. The third myth is that race conscious admissions is an attempt to make up for past discriminations. And that’s wrong again. Colleges and universities allow to use race based admissions policies to create like diverse student bodies. But colleges and universities are allowed to use race based policies. But there was the Supreme Court case, the regents of the University of California versus Bok, and the Supreme Court, ruled that colleges couldn’t use affirmative action to compensate for prior discrimination.

Michael Harriot: So race based admissions policies can’t make up for the past. And then the fourth one is race based admission policies mean unqualified minority students get accepted to college. That is simply not true. While university might allow, like Black students with lower test scores agreed to gain interest colleges to not accept students who fail to meet the college’s minimum qualification standards. So like, for instance, let’s say a college had to have 1000 SAT score to get into the college. Like they’re not letting Black students in, what, 800 SAT scores? What they’re saying is, okay, out of this pool of students who scored more than an 800 on the S.A.T., we’re going to make sure that we have a diverse class. Right. So some of those students might be Black students with a 1050 versus a white student with an 1100. Right. The best white students say they’ll have to worry about they’re not getting kicked out of classes. Mediocre  white people, really, who complain. Right.

Michael Harriot: Stay tuned for part 2 of our conversation on the merit myth. Right here on theGrio Daily.