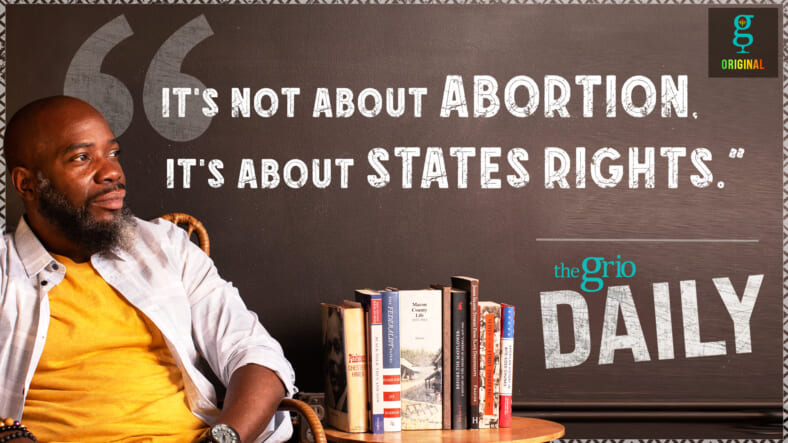 This Podcast Is Not About Abortion, Pt. 1

“It’s not about abortion, it’s about states’ rights.” Michael Harriot takes a deep dive into why the Supreme Court decided to overturn Roe v Wade

Michael Harriot [00:00:05] I’m sure you’ve heard that the United States Supreme Court overturned the right of women to obtain safe and legal abortions in the United States. People were outraged. Some were delighted. Some claimed the decision would turn America into a religious theocracy. Others say it is going to protect the life of the unborn. Some say it is about a women’s right to control their body. Other theories about the culture of life. Well, we’re going to talk about all of it today. We’re going to talk about the discussion, the politics and the reality. But there’s one thing we won’t talk about when discussing Dobbs versus Jackson. We won’t be talking about abortion. I’m Michael Harriot and this is theGrio Daily. So this case, Dobbs versus Jackson, it overturned the Roe versus Wade decision and Casey versus Planned Parenthood, the two decisions that basically gave women the right to control what they do with their body.

Robin Roberts [00:01:08] The Supreme Court overturning Roe versus Wade, ending abortion as a constitutional right after nearly a half century. The impact, as you know, felt across the country as soon as it came down. At least 26 states are expected to ban or severely restrict abortion rights.

Michael Harriot [00:01:26] The Supreme Court has basically said that every woman who gets pregnant has to carry a pregnancy to full term unless the men in her state legislature decide to protect that right. And so the decision was based on a couple of things they said abortion was not a constitutionally guaranteed right. So it should be left up to the states. And first of all, we’ve got to understand that the Constitution only guarantees like a few things. Right? It guarantees, you know, that Congress, the federal government, can’t interfere with certain rights. They can’t interfere with your freedom of speech. They can’t, you know, interfere with your due process rights. They can’t force soldiers to come and live in your home. But other than that, other than the things that the Constitution protects, what our Constitution does is say, well, your individual state can make any kind of law they wants to. They want to except the ones that this Constitution protects. So the Supreme Court is now saying that state legislatures get to tell women whether they have the right to carry a pregnant to full term or to terminate their pregnancy. How you control your body once you are pregnant. So pregnant women’s bodies are now in control of state legislatures is what the Supreme Court says. And they said it’s not a constitutionally guaranteed right.

Michael Harriot [00:03:07] And here’s the quote “we hold that Roe and Casey must be overruled. The Constitution makes no reference to abortion and no such right is implicitly protected by any constitutional provision, including the one with the defenders of Roe and Casey now chiefly rely the due process clause of the 14th Amendment. That provision has been held to guarantee some rights that are not mentioned in the Constitution. But any such right must be deeply rooted in this nation’s history and tradition and implicit in the concept of liberty. The right to abortion does not fall within this category,” the court said. They said that “until the latter part of the 20th century, such a right was entirely unknown in American law. Indeed, when the 14th Amendment was adopted, three quarters of the states made abortion a crime at all stages of pregnancy.”.

Michael Harriot [00:04:03] Did you see that? See their citing the 14th Amendment, which again was passed after the Civil War, which made Black people citizens and gave them equal protection under the law. And they said, like when the 14th Amendment was passed in the 1860s, they’re going to adhere to the tradition of the 1860s, because anything newer isn’t a tradition or a liberty that should be constitutionally guaranteed. And so the 14th Amendment. Let’s go over that for a minute. The point that they’re talking about specifically says “no state shall make or enforce any law which celebrates the privileges, what immunities of citizens of the United States, nor shall any state deprive any person of life, liberty or property without due process of law, nor deny to any person within its jurisdiction the equal protection of its laws.”.

Michael Harriot [00:05:11] Now, what the Supreme Court is saying is this doesn’t apply to women. They don’t think that that the 14th Amendment apply to a woman’s right to control a body. They’re literally saying that a woman’s right to control her body isn’t an American tradition, because for most of American history, men got to control a woman’s body. Because what they’re saying is when Roe versus Wade was decided. Women had only been voting for 40 years. So because men made the laws, they’re saying that tradition isn’t long standing, that a woman would get to control her body. It’s not about abortion. It is about a woman’s, what they call implicit liberty. A woman doesn’t implicitly have the right to determine whether or not she will carry a child in her body. Right. Like, women don’t get equal protection under law because we don’t have forced men to carry every pregnancy to term. We don’t force babies on men. We don’t force men to have every and raise and give birth to every baby that is produced. When a man ejaculates. Only women. And this equal protection clause does not apply to women now.

Michael Harriot [00:06:45] See Roe versus Wade basically says that a woman’s bodily autonomy was a constitutional right, but this court says that. I mean, this is what they’re saying explicitly and implicitly that the Supreme Court justices before them were wrong. Right. Like now, precedence doesn’t matter. Right. The court apparently doesn’t have to depend on the precedent set by previous Supreme courts. They could say, look, the people who decided Brown versus Board of Education that ended segregation, you know what, they were wrong. And that’s that’s a really incredible thing because really, we can review any decision. There are a lot of Supreme Court decisions that conservatives and White people disagree with. Right. Like White people initially disagreed with Brown versus Board of Education. They initially disagreed with the Voting Rights Act. They initially disagreed with the Civil Rights Act, right. They could come after Loving versus Virginia because it was made on that same premise. Right. Due process. The 14th Amendment. That’s what Loving versus Virginia, the case that, you know, protected the right of people to have interracial marriages. Clarence Thomas they coming for you. That’s what Loving versus Virginia was based on, based on equal protection of the law.

News Anchor [00:08:12] Conservative Justice Clarence Thomas wrote, In future cases, we should reconsider all of this court’s substantive due process precedents, including Griswold, Laurence and Obergefell. These cases affirmed contraception, gay sex and gay marriage.

Michael Harriot [00:08:28] Now, precedence doesn’t matter. Right. A court apparently doesn’t have to depend on the precedent set by previous Supreme Court.

Michael Harriot [00:08:42] Thank you for listening to theGrio Daily. If you like what you heard, please give us a five star review. Download theGrio app, subscribe to the show and share it with everyone you know. Please email all questions, suggestions and compliments to podcasts at theGrio dot com.

Dr. Christina Greer [00:09:05] You’re watching The Blackest Questions podcast with Christina Greer. And this podcast we ask our guests five of the Blackest questions so we can learn a little bit more about them and have some fun while we’re doing it.

Dr. Christina Greer [00:09:19] We’re also going to learn a lot about Black history, past and present.

Dr. Christina Greer [00:09:25] So here’s how it works. We have five rounds of questions about Us. Black history, the whole diaspora, current events, you name it. With each round, the questions get a little tougher.

Dr. Christina Greer [00:09:41]  Subscribe to the show wherever you listen to your podcast and share it with everyone you know.