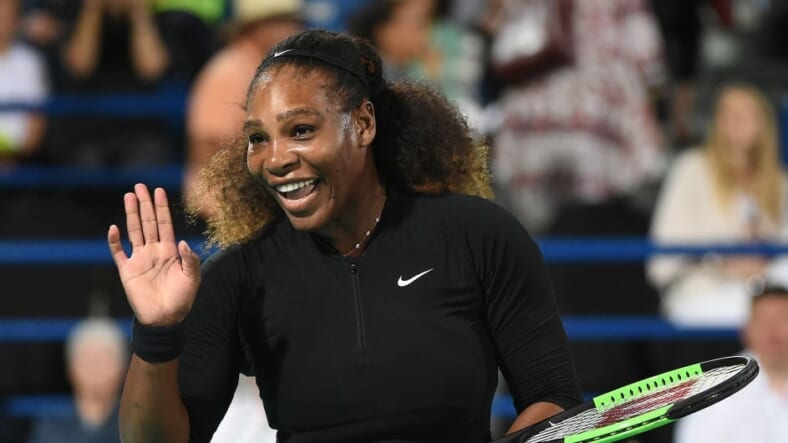 ABU DHABI, United Arab Emirates (AP) — Serena Williams lost in her return to tennis after giving birth in September, beaten by French Open champion Jelena Ostapenko in an exhibition Saturday and still unsure if she will defend her Australian Open title.

Williams called it a “wonderful” match despite the defeat — she took the second set in a score of 6-2, 3-6 and 10-5 in a super tiebreaker.

“I don’t know if I am totally ready to come back on the tour yet. I know that when I come back I definitely want to be competing for championships. I am definitely looking forward to getting back out there,” Williams said.

“I am taking it one day at a time. I am going to assess everything with my team before deciding.”

The 36-year-old Williams took time off after winning the Australian Open last January while pregnant. She gave birth to her first child, a girl named Alexis Olympia Ohanian Jr., on Sept. 1. She married Reddit co-founder Alexis Ohanian in November.

Williams struggled with her serve in the 67-minute match at the Mubadala World Tennis Championship. But, after nearly a year away from the game, she did win a set against the world’s No. 7 player

“I don’t think I am going to rate my performance,” Williams said. “I have plenty of comebacks, from injuries, from surgeries, but I’ve never had a comeback after actually giving birth to a human being. So, in my eyes, I feel it was a wonderful, wonderful match for me.”

Williams insisted she has a lot more tennis to play.

“Knowing that I have won 23 Grand Slam titles and several other titles, I don’t think I have anything more left to prove,” she said. “But I am not done yet.”

Williams won her opening game, breaking Ostapenko. But she was nowhere near her best in the first set before fighting back and winning the second.

After the initial break, Ostapenko latched onto Williams’ weak serves and capitalized on several unforced errors to go up 4-1 with two breaks.

Williams again struggled with her serve in the second set. But she went ahead 3-0 with a couple of early breaks and hit with more confidence, including several crowd-pleasing double-handed passing shots. Another break in the ninth game gave her the set.

“In the beginning, it felt a little tough. But as the match moved on, I was less afraid. I knew I was not going to fall over and break,” she said. “The more I played, the more confident I felt that I would be able to go for shots that I was afraid to go for in the first set.”

In the super tiebreaker, Ostapenko raced to an 8-2 lead before halting a brief recovery by Williams.

“For me, it is all about physical, how I am feeling physically. … I am just proud being out here and playing in Abu Dhabi and to be able to just compete,” Williams said. “I have had a tough few months and I am just excited to be able to play again.”

It was the first time a women’s match had been played in the traditionally men’s only exhibition.

In the second set, Bautista Agut broke in the second game, but the South African broke back immediately. An aggressive Anderson swept the tiebreaker.

Copyright 2017 The Associated Press. All rights reserved. This material may not be published, broadcast, rewritten or redistributed.