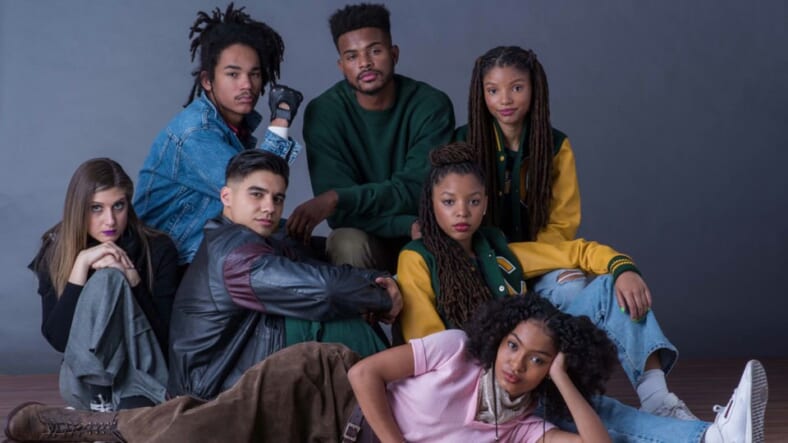 The cast of Grown-ish, Grown-ish, the highly anticipated Black-ish spinoff on Freeform. (Courtesy of Freeform.)

2018 is here and theres a whole new batch of TV snacks to feast on that has us excited.

Here’s a rundown of some shows that should definitely be on your watch-list ASAP:

To Rome For Love

Relationship expert Diann Valentin has a secret weapon when it comes to finding love for black women…Italy! This TV show is a new reality series from Bravo shows five women on a journey to find love in Rome while uncovering the hang-ups that got them into their romantic rut in the first place. The ladies diverse backgrounds and ages make this show especially interesting and we get to watch Gina Neely try her hand as a single woman after her very public split from her husband, Pat Neely.

When: Wednesdays @ 10pm on FOX

Angela Bassett, Aisha Hinds, and Rockmond Dunbar round out a stellar ensemble cast that lifts the veil on the lives of everyday heroes. As first responders to emergencies that range from mundane to mind-blowing, viewers get a glimpse of what it takes for these brave men and women to deal with life-changing situations on a daily basis while navigating their own personal issues. Ryan Murphy’s latest offering delivers a gripping drama series worth sinking your teeth into.

When: Wednesdays @ 8pm on Freeform

The black-ish spinoff series is worth watching for several reasons, not least of which is the endless amount of black girl magic served up by its star, Yara Shahidi. Expect the show helmed by Kenya Barris to hit on important issues of the day without getting too preachy while highlighting what it must be like to navigate college in this day and age.

Mara Brock Akil and Salim Akil have teamed up to deliver another hit and this time, they’re taking the comic world by storm. Aside from featuring a black family of superheroes based on the DC Comic series, expect high-energy fun, dynamic character development and a new take on an old favorite. Bonus: Nafessa Williams is not to be missed in the role of Thunder.

When: Sundays @ 7pm on Oxygen

Brian Banks is on a mission to show the world what happens when the criminal justice system fails us. Wrongfully convicted of rape as a teen, the former NFL player teams up with prosecutor, Loni Coombs, to uncover the truth about questionable cases that may have landed the wrong person behind bars.

When: Season 2 premieres January 23 on BET

Anika Noni Rose is a force to be reckoned with in any role but she’s particularly perfect for this one, as the President of an HBCU. The show will have no shortage of drama when it returns to BET this month and doesn’t shy away from tough issues facing today’s youth. The juicy storyline is heating up and fans can expect more than one shocker in Season 2.

When: Sundays @ 10pm on Showtime

Lena Waithe’s highly-anticipated series shows life on the Southside of Chicago through several different perspectives and the result is nothing short of TV magic. Standout performances from Jason Mitchell, Yolanda Ross, and Moonlight star, Alex R. Hibbert are sure to blow your mind.

This unusual singing competition has an unconventional twist and features some of music’s biggest influencers on the judge’s panel that included Diddy, DJ Khaled, Meghan Trainor and Charlie Walk. This show serves up all the star power we would expect from a reality competition show minus the monotony of the traditional format. You can expect your usual eyeroll-prompting performances from some not-so great acts while feasting your eyes and ears on some major talent. Even more intriguing is the fact that you can sign up to take the stage as soon as the following week if you’re inclined to challenge the contenders, making this real-time competition a lot more interesting.