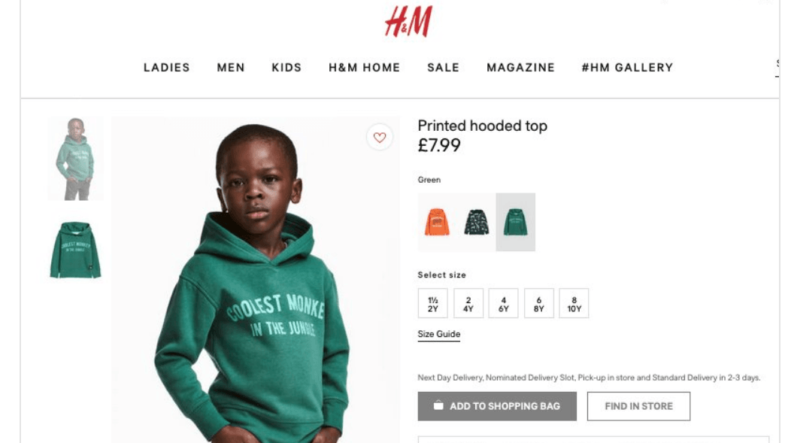 H&M apologized after it was roasted on Twitter over a “racist” hoodie worn by a Black child model on its UK website.

The hoodie, emblazoned with the words “Coolest Monkey in the Jungle,” drew swift backlash.

On Monday morning, the racist hoodie was still up for sale with an altered image without the model. However, the item was later removed from all of its websites.

In addition, H&M offered another apology to CBS MoneyWatch: “We sincerely apologize for this image. It has been now removed from all online channels and the product will not be for sale in the United States. We believe in diversity and inclusion in all that we do, and will be reviewing our internal routines.”

Most noteworthy, this isn’t the first time H&M has been in hot water over race. In 2015, H&M South Africa was ironically called out for not having any Black models.

The brand only made things worse with its apology when it explained that the use of white models portrayed a more “positive image.” Of course, the statement was quickly slammed as tone deaf.

You can check out some of the reactions from the Twitterverse below.

. @hm, have you lost your damned minds?!?!?! pic.twitter.com/EYuCXLZtv3

Whose idea was it at @hm to have this little sweet black boy wear a jumper that says ‘coolest monkey in the jungle’?

More casual racism from H&M. This is nothing new when it comes to these clothing companies like Abercrombie and Tommy Hilfilger who have a long history of using their products to convey racist messages. https://t.co/6XwimxngCS

@hm this is disgusting & irresponsible. You know the history of racist using the term “monkey” to demean people of African descent… and you put this on your website! ???? “Coolest Monkey In the Jungle” #SMH pic.twitter.com/IY877D2d8R

I’m sure the apologies are a coming. And the ads will be pulled. I’m certain there will Be media fixers and whatnot and maybe a grand gesture like a donation to some charity (donations under these circumstances are the corporate version #SomeOfMyBestFriendsAre move if there ever was one) all this tells me about @HM is that the seats in the boardroom lack something…wanna take a guess?