Not Having It: Angela Rye slams Rick Santorum for ‘talking down’ to her

The CNN political commentator got Santorum ALL the way together 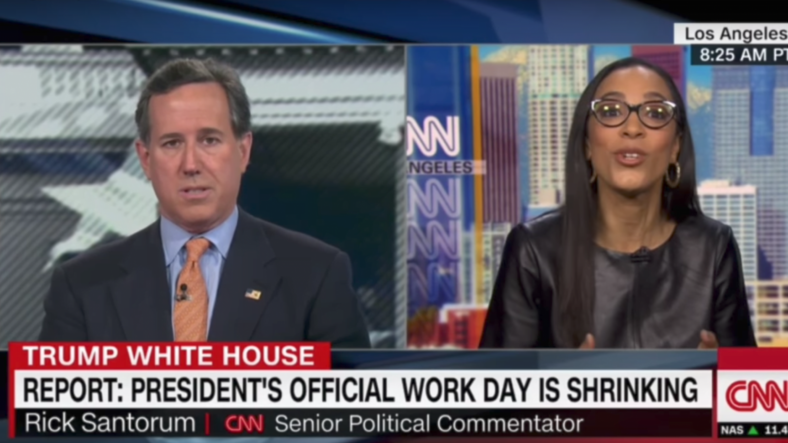 During a discussion about reports that Trump was taking “executive time” in the morning and therefore shrinking the time he spent working in the Oval Office, Santorum suggested that it was perfectly normal for someone to need “down time” in a stressful job like the presidency.

But Rye didn’t find it so normal.

“I find it very disconcerting,” she said. “I find it hard to understand that someone who is a working professional would need three hours in the morning to do whatever. If he needs downtime, here’s I suggest he use it. Put down the remote, put down your phone and stay off of Twitter, put down other things besides human beings, put down everything that you’re doing to make this office a disgrace.”

“This is the kind of disqualifying commentary that we see from the left,” Santorum replied.

“It’s not disqualifying because you don’t like it,” Rye shot back.

“It is, because you’re basically saying, ‘Whatever the president does is wrong,’” Santorum insisted.

Santorum then shot back with this condescending remark: “I don’t know if you know, but the president is a pretty stressful office.”

But that was a little too far for Rye.

“Former Sen. Santorum,” she said, “let me give you also a recommendation. Speaking of down, what you should not do is not talk down to another fellow commentator on the same network. So, you don’t have to agree with my commentary at all. But it is certainly not disqualifying because I disagree with you.”

“And it certainly is disqualifying if a work professional spends the first three hours of the workday spending time relaxing when they need to get abreast on foreign policy issues, domestic policy issues, making sure that they can manage their team instead of then wreaking havoc all over the country and certainly in the White House. I don’t think that it’s right for you to talk down to a fellow commentator because you don’t like what I said.”