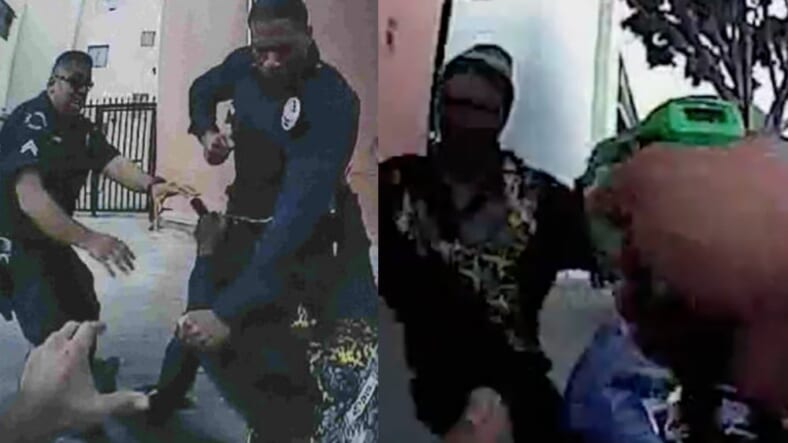 For nearly three years, the LAPD has held onto video footage of the controversial police shooting of Charly “Africa” Keunang on skid row.

However, the Los Angeles Times acquired the footage, which showed the deadly encounter between the officers and Keunang in March of 2015.

While Keunang’s family, who have filed a wrongful death lawsuit, insisted the recordings proved the police escalated the situation unnecessarily, the police maintained the video showed the shooting was justified.

The footage showed police responding to a call about an attempted robbery. In the clip, Officer Francisco Martinez can be heard asking for a Taser while questioning Keunang, warning him the Taser will hurt.

“Let me express myself,” Keunang says.

When Martinez orders Keunang against the wall, Keunang goes back into his tent. Sgt. Chand Syed and another officer then open the tent.

Then, Keunang stands, and Martinez appears to fire the Taser. Keunang spins his arms wildly, and the officers bring him to the ground, with one pressing a Taser to his leg.

Moments later, an officer shouts, “He’s got my gun!”

The first gunshot rings out, and then Martinez, Syed, and Daniel Torres open fire on Keunang.

Police brutality activists saw the video as proof that the LAPD escalated the situation with Charly “Africa” Keunang needlessly.

Samuel Walker, a nationally recognized expert on policing, said that the officers could have peacefully answered Keunang’s questions but instead chose to threaten and yell at him.

The LAPD insisted the video of the controversial police shooting proved that the officers were justified in their use of deadly force. Hours after the Times reported on the video, they produced two enhanced images that they said showed that Keunang did in fact have a hand on the gun.

“When you watch that video in real-time, it is difficult to see the suspect’s hand on the officer’s gun,” Chief Charlie Becktold the Times. “But when you slow it down, frame by frame, it is quite easy to see.”

“This was a cop-created killing. This did not need to happen,” Keunang family attorney Joshua Piovia-Scott told the Times. “And the reason it did happen is because of the conduct of these officers.”