Ben Carson softly condemns Trump’s ‘sh*thole’ remarks during MLK speech: ‘I don’t agree with the president about everything’

Carson was attending a service on Monday's Martin Luther King Jr. holiday. His comments were met with applause. 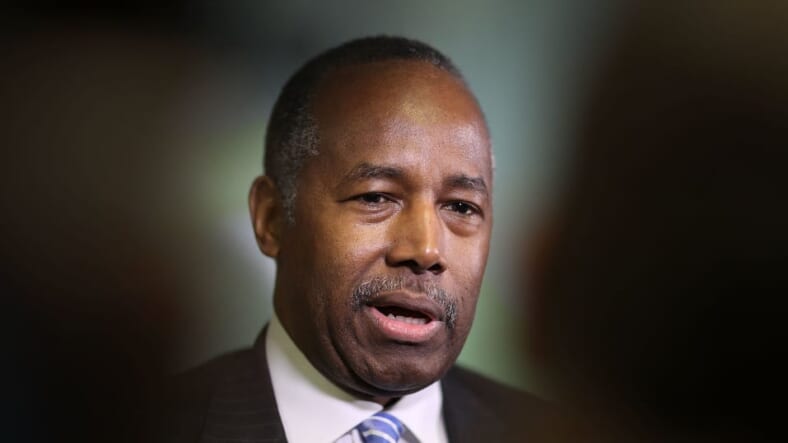 “I’m a member of this administration and I don’t agree with the president about everything that he says or of how it is said,” Carson said while speaking at Ebenezer Baptist Church in Atlanta, Georgia.

14 Ben Carson Quotes That Will Make You Cringe in Agony

Carson was attending a service on Monday’s Martin Luther King Jr. holiday. His comments were met with applause.

“If the way you say things is so inflammatory that people can’t hear your message, it is not helpful. And that is why I don’t do that anymore.”

During an meeting on immigration last week, President Trump called several African nations, Haiti and El Salvador “sh**hole countries.” The remarks led to widespread backlash from Democrats and even some Republicans.

Following the reports, the White House did not explicitly deny that Trump made the comments. Friday morning, Trump tweeted offered a vague denial and only admitted to using “tough” language.

He later tried to get more specific, making a reference to Haiti directly:

Never said anything derogatory about Haitians other than Haiti is, obviously, a very poor and troubled country. Never said “take them out.” Made up by Dems. I have a wonderful relationship with Haitians. Probably should record future meetings – unfortunately, no trust!

It’s still unclear as to what he’s admitting to or actually denying.

He later followed up these tweets with a specific attack on Senator Dick Durbin (D-Ill.):

Senator Dicky Durbin totally misrepresented what was said at the DACA meeting. Deals can’t get made when there is no trust! Durbin blew DACA and is hurting our Military.

Ben Carson has been a strong apologist for President Trump and his long history of racist statements and problematic behavior.

After Trump was strongly criticized for his interaction with the widow of fallen veteran Sgt. La David Johnson, Carson dismissed the controversy and blamed the media for being unfair.

Whatever you say Ben.