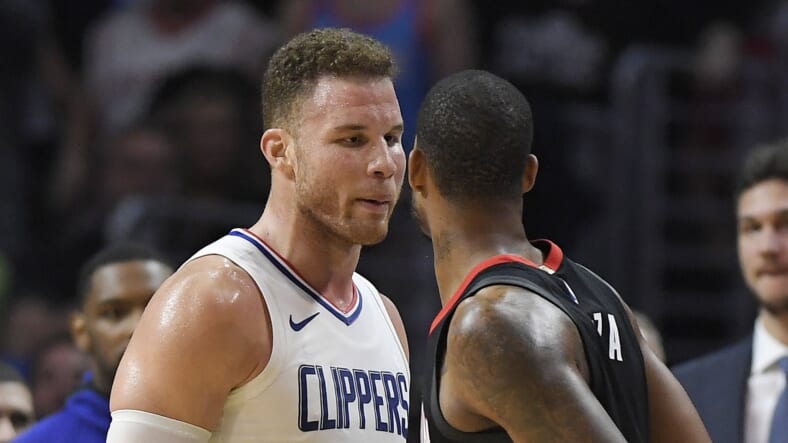 Los Angeles Clippers forward Blake Griffin, left, and Houston Rockets forward Trevor Ariza have words before both of them were ejected in the closing seconds of an NBA basketball game, Monday, Jan. 15, 2018, in Los Angeles. The Clippers won 113-102. (AP Photo/Mark J. Terrill)

LOS ANGELES (AP) — The NBA is planning to speak with players from both the Houston Rockets and Los Angeles Clippers to determine the specifics of late-game and postgame events involving the teams.

NBA spokesman Tim Frank said Tuesday that the league would look into the matter. Tempers boiled over Monday night late in the Clippers’ 113-102 victory , to the point where several security guards were needed outside the Houston locker room postgame.

Citing anonymous NBA sources, ESPN reported several Rockets players headed toward the Clippers’ locker room afterward, seeking a confrontation, but were escorted away by security before anything got physical.

There were late-game incidents as well in Chris Paul’s first game in Los Angeles since he was traded to the Rockets this past summer. Clippers star Blake Griffin appeared to bump Houston coach Mike D’Antoni, and they exchanged words. Griffin and Houston’s Trevor Ariza were later ejected after another incident.

Postgame, neither team offered specifics on what happened, if anything, in the Clippers’ locker room.

“We were where we were supposed to be,” Griffin said. “We were in our locker room.”

Paul was asked postgame about what happened, and dodged the question.

It seems almost inevitable that the NBA will have to take some disciplinary action against players. Paul is also the president of the National Basketball Players Association, which did not immediately respond to a request for comment Tuesday morning.

Both teams are off Tuesday, which means the NBA will have some time to sort out all the various messes. The Clippers next play Wednesday against Denver, and Houston is off until it plays host to Minnesota on Thursday.

Clippers coach Doc Rivers also said his team was in its own locker room.

“Their entire team was not in their locker room,” he said, referring to the Rockets. Walking into his postgame interview, Rivers joked, “We’re honoring Martin Luther King Jr. Day, we’re non-violent.”

Copyright 2018 The Associated Press. All rights reserved. This material may not be published, broadcast, rewritten or redistributed.