In true non-presidential form, Trump fails to protect his family from the rain 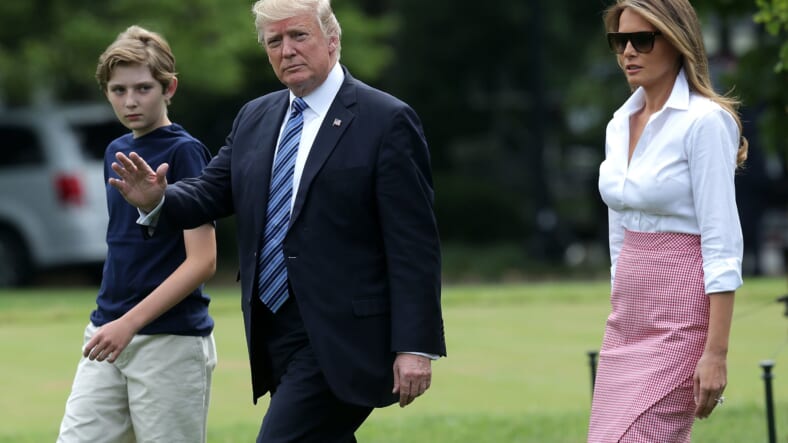 Donald Trump has the greatest respect for women. That’s why he’s so chivalrous he hogged a huge umbrella all to himself and let his wife and youngest son brave the elements without cover.

On Tuesday, new press photos emerged showing the president standing under a huge black umbrella. That on its own isn’t too noteworthy, considering the weather was blustery as he boarded Air Force One.

What is noteworthy is that his wife, Melania, and son Barron were also boarding Air Force One, and they got absolutely no love from the president when it came to defense against the elements.

Instead, Melania and Barron went uncovered.

Obviously, the images of the president literally leaving his wife and son in the cold sparked hilarious reactions on Twitter mercilessly mocking him for his complete lack of awareness.

Here’s Trump holding an umbrella over himself while boarding Air Force One with Melania & Barron, because his hair. pic.twitter.com/dsfKaNNd5U

It wasn’t just Twitter in on the fun, either. Newsweek weighed in with an excellent point: it’s entirely likely that the president wanted to protect his hair.

Specifically, the site pointed to Michael Wolff’s Fire and Fury: Inside the Trump White House, which described a president obsessed with his appearance and hairstyle.

Wolff wrote in the book that Ivanka Trump had mocked her father for his hairstyle, writing, “She often described the mechanics behind it to friends: an absolutely clean pate — a contained island after scalp-reduction surgery — surrounded by a furry circle of hair around the sides and front, from which all ends are drawn up to meet in the center and then swept back and secured by a stiffening spray.”

That kind of carefully-kept hairstyle would be hard to maintain in the wet weather. So, Newsweek argued, the president probably thought he needed the umbrella, lest all that work come crashing down on him.

Check out some of Twitter’s best roasts of the president’s umbrella-gate below.

What a rude, self-absorbed asswipe. https://t.co/uyWYgujDHF

Trump refuses to share his umbrella with Melania & Barron: You can’t stand under my um-b-rella—ella—ellahttps://t.co/yahBbSejaF

The media is attacking Trump for not sharing his umbrella with Melania and Barron, but that’s Fake News.

Says a lot about a person. Trump holds an umbrella over himself and not his wife or son. pic.twitter.com/AMaIsWgvgU