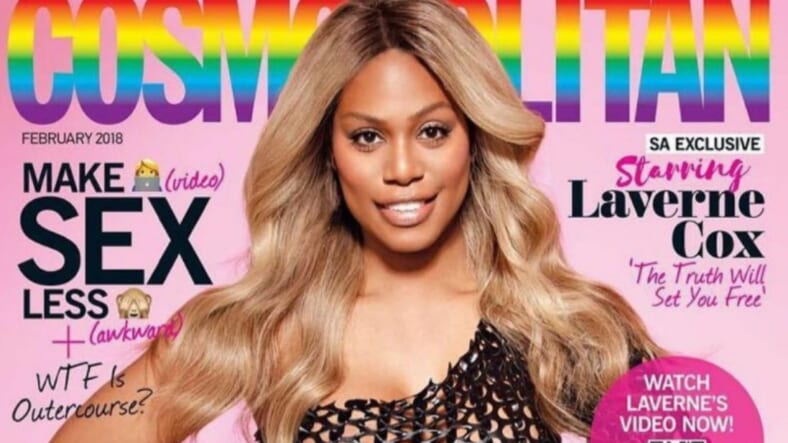 Laverne Cox is out here making history as the first trans woman to cover Cosmopolitan.

Cosmopolitan South Africa’s February issue has a LGBTQ focus, with a “Say Yes to Love” edition featuring a message of love and support from the transgender Orange is the New Black star.

“Your voice matters, the truth of who you know yourselves to be matters. The truth will set you free!” Cox says in a letter in the new issue.

In that same letter, Cox calls for the world to accept transgender people and to allow them to live their lives without fear.

“Trans women deserve to be loved out in the open and in the light,” Laverne Cox writes.

As a testament to how hard it can be for trans women to live their lives in secret, Cox also opened up to Cosmopolitan about how the most romantic thing a partner had ever done for her was to introduce her to his family.

“As a black transgender woman, I’ve often been kept a secret by the men I’ve dated,” she explained. “So when my ex-boyfriend introduced me to his dad, and invited me to spend Hanukkah with him and his family, it was the most special thing ever.”

Holly Meadows, the Editor-in-Chief of Cosmopolitan South Africa, celebrated this issue by saying it was time to let people of all orientations and identities celebrate Valentine’s Day.

“Our goal was to play a small part in providing visibility for the LGBTQI+ community, of which Laverne has become a revolutionary icon,” Meadows said.

“We wanted to disrupt hetero-normative ideas around February and Valentine’s Day and look at love in 2018 – including acceptance of self, others and non-binary relationships.”

Meadows also heralded Cox as “the world’s most vocal trans poster girl,” which was why the magazine wanted her on the cover.

Laverne Cox has never been quiet about her identity or her views, and we’re glad that, this Valentine’s Day, she’s giving a voice to all women.