Actress, author, activist, and Philanthropist, Holly Robinson Peete opens up about to new projects on The Hallmark Channel. 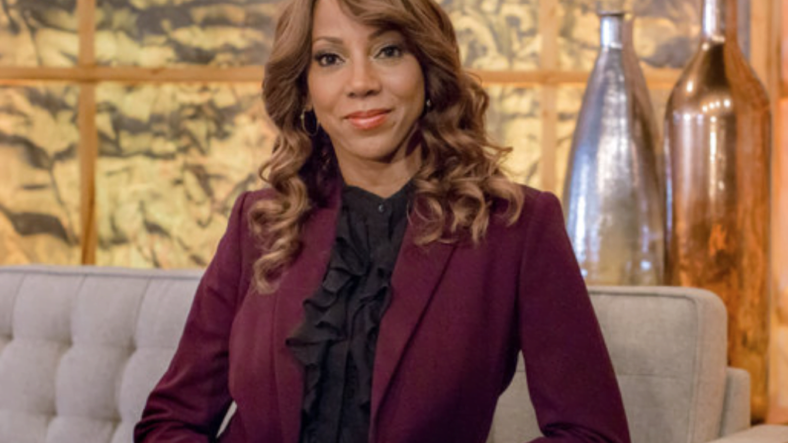 Holly Robinson Peete and her husband, former NFL player, Rodney Peete, are no strangers to working together. They launched the HollyRod Foundation in 1997 and worked on a short-lived OWN docu-series, For Peete’s Sake.

Now, the pair is inviting cameras back into their home for their upcoming project, Meet The Peetes. The show will be the first reality TV venture for The Hallmark Channel. Robinson Peete fans can also catch her starring in a new franchise of murder mystery movies created by Al Roker on the network.

Holly Robinson Peete opened up about her decision to do both projects in an exclusive interview with TheGrio.

Morning Show Mystery premiered this week on Hallmark Channel and stars Holly Robinson Peete as Billie Blessings, a beloved chef, restaurant owner, and morning show segment host to #1 suspect in a murder case when one of the executives at the network dies from poisoning. The film is based on the best-selling novels by TODAY host, Al Roker.

“I was so excited to do this when Al [Roker] told me about it. The only problem was that the main character was a man. We changed Billy to Billie and that’s how it all happened. Al has been a longtime family friend and our daughters are very close so everything was very familial and fell into place,” says Peete.

“It was such a fun movie mystery to shoot and we’re gonna do another one in two months.”

Holly Robinson Peete stars in the film alongside Rick Fox.

“You know, they forced me to work with Rick Fox and that was just awful but somebody has to do it,” she jokes. “He’s obviously a handsome guy but he’s a very generous actor and we’ve worked together before. We had instant chemistry.”

Peete admits she and her husband were initially reluctant to jump into the reality TV world.

“We were a little bit hesitant because often we associate reality shows with negative representations and conflict-driven stuff. We wanted to document some positive things and positive aspects of a family working together, not conflict for conflict’s sake,” she explains.

“What we found was that we were helping others especially when it came to [our son] RJ and his autism. If I would have been able to turn on the TV, when RJ was diagnosed, and see a family dealing with autism, that would have been so much help so we feel like there’s some aspirational elements in the show that people are going to connect to and relate to.”

According to Robinson Peete, viewers will get a look at all aspects of her family’s life, including her marriage.

“As far as my husband and I go, we have our issues just like everybody else. We struggle and we are very honest about what we have done to stay afloat. I think it’s a good example to see how we have managed almost 25 years together. We’re in a good space to talk about that. You don’t get there without some bumps and bruises but you learn and you keep moving and I think that’s a good message to put out there. I feel that showing that love and showing that process is a good thing and it keeps us on our toes.”

Check out a clip below:

Meet the Peetes premieres on Sunday, February 18 at 10 p.m. ET on Hallmark Channel