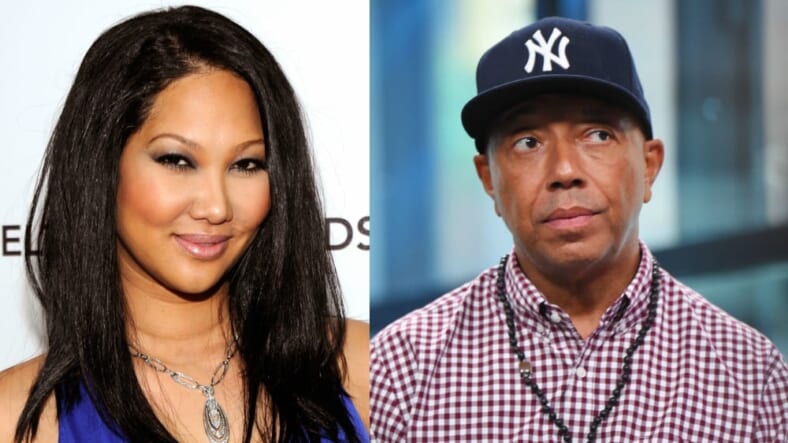 Kimora Lee Simmons is standing by her ex-husband, Russell Simmons, as he faces multiple accusations of rape and sexual assault.

Despite the shocking claims leveled against him, Kimora says that’s just not the man she knows and loves.

A TMZ photographer catching up to Kimora to ask her about the allegations.

And when pressed specifically on whether she believes he’s innocent, she said, “Yeah, I do.”

#PressPlay: #KimoraLeeSimmons says she believes her ex-hubby #RussellSimmons is innocent. She was spotted in Beverly Hills today with her son #WolfeLee ?: Backgrid

Later, she took to Instagram to further clarify her remarks, with the caption, “Now that I put my baby down…”

“I add my voice to the chorus of those speaking out against harassment and violence in all its forms,” she wrote.

“I have known Russell for over 25 years. We were close friends, married, divorced and have remained friends, co-parents and partners throughout it all. These allegations against him are nothing like the person I have known in all that time. I have known him to be a caring and supportive father and someone who has worked tirelessly to uplift disenfranchised communities.”

Now that I put my baby down…

One of Simmons’ accusers is now suing him for millions of dollars over an alleged rape.

According to the Los Angeles Times, Jennifer Jarosik claimed that Simmons propositioned her for sex in 2016 after inviting her to his house. When she refused, he allegedly pushed her onto the bed. When she fought back, she claimed that he knocked her off the bed and hit her in the head before forcing himself on her.

Jarosik, who claimed to have met Russell Simmons in 2006, said that she was in “shock and fear” when Simmons raped her. She also claimed that she was “sick, sore, lame, disabled and disordered, both internally and externally and suffered from extreme emotional distress.”

Now, according to TMZ, she is suing for punitive damages as well as unspecified actual damages.

One of the women, Sherri Hines, told the Los Angeles Times last year that Simmons had raped her in his New York office when she was part of the Mercedes Ladies hip-hop group.

Hines later recalled on Megyn Kelly’s daytime talk show how she was only 17 or 18 when Simmons invited her into his office. She said that she went because she thought he wanted to talk about a record deal.

Instead, she said, she was “pinned down” on his couch and raped.

“The way I felt at the time was…I can’t believe this man just violated me like I was nothing,” she told Kelly.

The second woman has chosen to remain anonymous. According to TMZ, who reported on the police reports, the alleged rape took place in 1991 after the woman and Russell Simmons had gone out on a date.

TMZ reported that the woman said she was 32 when they went back to his Manhattan home together. She claimed that he tried to take off her dress while they were seated on the couch, but she rejected his advances. He then pushed her down and forcibly raped her.

The site also reported that, of the 14 women accusing Simmons of rape, 7 of them are working with the NYPD. Since there is no statute of limitations in New York for rape, even older assaults can still be investigated.

Russell Simmons has stepped down from his company. He continues to maintain his innocence and has denied that he ever raped anyone.

He even used the hashtag #NotMe in a social media post claiming he was using it to clear his name. The post received massive backlash for appearing to co-opt the #MeToo movement.

“My intention is not to diminish the #MeToo movement in anyway, but instead hold my accusers accountable,” Russell Simmons explained.