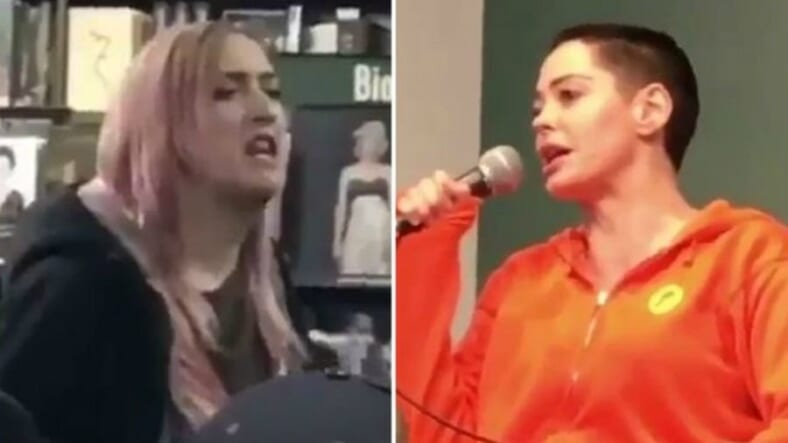 Rose McGowan is living in fear and has decided to cancel her book tour.

On Thursday, McGowan sat down for an interview with journalist Ronan Farrow. During the conversation, they spoke of abuse, recovery as well as Weinstein.

“What are you scared of, Rose?” Farrow asked the 44-year-old actress. “Assassination,” she replied.

“You really think that you could be killed?” Farrow queried. “Someone laughed, but I know you’re not joking.”

McGowan responded directly to the uncertain audience. “I don’t care what you think. I know my life, and I know my reality, and I know that people like me get killed.”

“You believe that Harvey Weinstein is after you in an ongoing way?” asked Farrow.

McGowan has been speaking out about the alleged rape she suffered at the hands of Harvey Weinstein since October. She feels that coming forward so publicly has put her life in danger.

In the past, Weinstein hired ex-Israeli intelligence Mossad agents to gain information on his accusers. One of these investigators even met with Rose McGowan under false pretenses. The woman pretended to be a women’s rights advocate while surreptitiously recording the meetings.

She said in the interview that she is still being tracked by those who work for Weinstein.

“Who else cares? Who else is going to stalk me this long?”

Rose McGowan has meltdown on stage at Barnes & Nobles book signing after trans heckler yells that she hasn't done anything for trans women who are victims of sexual assault. pic.twitter.com/fTRafCUNcL

To add insult to injury, the previous day McGowan got into an argument with a trans audience member during a reading of her book. The audience member stood up and wanted McGowan to address some of the comments she had made on RuPaul’s July 2017 podcast. This ended with the audience member and McGowan screaming at each other.

During the Farrow interview, she brought up the encounter. “There was a plant last night. I had my first book reading. It was definitely a fake plant that got up and started screaming at me.”

She did not directly accuse Weinstein of setting up the incident though she did imply it.

Weinstein’s PR firm responded to her comments saying, “That’s absolutely 100 percent false. No one is monitoring her whereabouts.

“It’s unfortunate that she is choosing to marginalize a community that is fighting to have their voice heard by claiming that the individual was a ‘plant’ of my client. It’s simply untrue and disrespectful to the transgender community.”

Near the end of the Farrow interview, Rose McGowan addressed her drug possession arrest that followed police finding cocaine in her wallet last year.

“I hate that handcuffs have been on me and not him,” she said tearfully.

She added, “I don’t care what people say. Please get that straight. I can’t, because it will kill me.”