The team is heartbroken to hear the news of his passing. 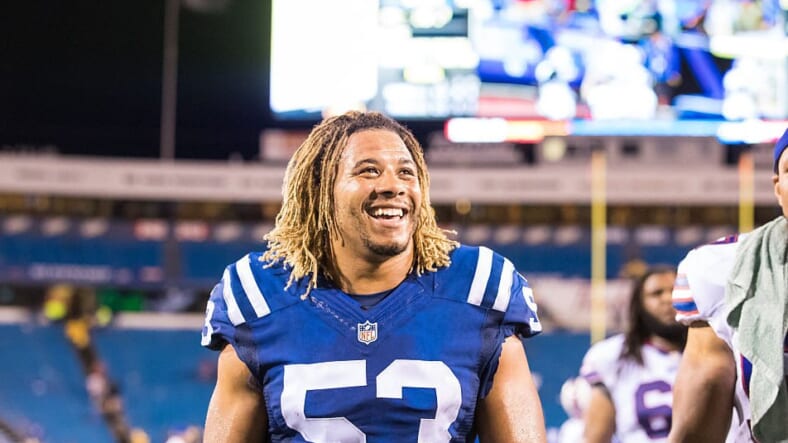 Edwin Jackson #53 of the Indianapolis Colts leaves the field after the game against the Buffalo Bills on August 13, 2016 at Ralph Wilson Stadium in Orchard Park, New York. (Photo by Brett Carlsen/Getty Images)

Edwin Jackson, a linebacker for the Indianapolis Colts, was killed early Sunday after he was hit by a suspected drunk driver.

According to initial police reports, authorities believe that Jackson, 26, had become sick while traveling with ride sharing operator Jeffrey Monroe, 54. Police believe that Monroe pulled over to the shoulder along the side of Interstate 70 in Indianapolis just before 4 a.m. on Sunday, and that’s when a suspected drunk driver plowed into the rear of Monroe’s car.

Both Jackson and Monroe were killed.

Police identified the driver of the truck that hit Jackson and Monroe as 37-year old Alex Cabrera. Although Cabrera attempted to flee the scene on foot, he was later apprehended. He is suspected of driving while intoxicated, and police say he was also driving without a license.

The police are still investigating the incident.

Since the tragic news broke, the Colts have released a statement expressing their sorrow.

“We were heartbroken to hear the news of Edwin Jackson’s passing,” the statement read, according to the NFL.com website. “Edwin was loved by all in the Colts organization. We admired his outgoing personality, competitive spirit and hard-working mentality. He was well-respected among all with whom he crossed paths, and he will be greatly missed in our locker room and throughout our entire organization.”

“We also understand that another person lost his life in the accident, only adding to our sorrow on this day. We are shocked and saddened by this tragedy, and our thoughts and prayers are with the families of both men during this difficult time.”

Our hearts and prayers are with Edwin Jackson’s family. Terrific young man, respected and liked by all. Rest In Peace, Edwin.

The 26-year-old football player signed with the Colts in 2015 on their practice squad. He played in eight games in 2016 before being placed on the injured reserve last September.