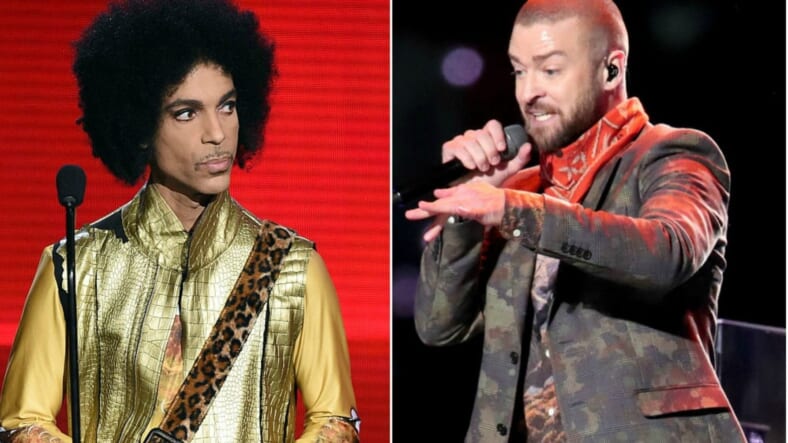 Apparently bowing to social media pressure, Justin Timberlake reportedly backed out of using a Prince hologram during his Super Bowl performance at the last minute.

Page Six reported that Timberlake was gearing up to use a Prince hologram of the late icon, but social media pressure scared him off of the idea.

“He was 100 percent ready to use the hologram but nixed it due to backlash from social media and Prince fans. That’s why he had that sheet up like in your mama’s backyard,” a source told the site.

Sheila E. shot him down

This reporting aligns with what Sheila E. said in a recent interview with “Entertainment Tonight.” The famed musician and longtime Prince collaborator seemed to suggest that she had been the one to make sure no hologram appeared at the Super Bowl.

“I just said no. I just felt that it was too soon,” she told ET. “The hologram was weird, and Prince did tell me [to] make sure nobody ever does a hologram [of him] . . . He thought it was very demonic and that’s his spiritual beliefs.”

She also tweeted to fans that she and Timberlake had spoken on Saturday and confirmed that there would be no hologram.

“Family, I spoke w/Justin 2nite and he shared heartfelt words of respect for Prince & the Purple fans . . . There is no hologram,” she wrote.

A Timberlake source disputed claims that a Prince hologram was never in Justin’s performance plans, telling Page Six, “There’s no way Justin would ever disrespect Prince’s legacy. He didn’t change his performance.”

As for the Prince estate, they released a statement suggesting that Timberlake had their backing, saying, “Justin Timberlake, the NFL and the City of Minneapolis used the stadium and the city to give a beautiful hometown tribute to Prince. The two pieces of footage that appeared on the screens were licensed from the ‘Purple Rain’ movie and a vintage performance in Syracuse, NY.”

Either way, at least we were all spared from watching Timberlake try to tribute Prince with a hologram he never wanted.

Justin Timberlake has stirred up all kinds of Prince-related controversy through the years even before the rumors of a Prince hologram surfaced.

There was outrage last month over Timberlake’s Man of the Woods album release and listening party reportedly scheduled to be held at Prince’s Minneapolis estate, Paisley Park.

It wasn’t just the location that Prince fans were upset about, it was the fact that JT would be serving alcohol at his party. Prince was a devout Jehovah’s Witness and abstained from drinking. Many felt it was disrespectful of Timberlake to have people drinking at Prince’s estate.

Prince fans were quick to point out on social media that Timberlake had also dissed Prince on Timbaland’s 2007 song, “Give It To Me.”

In the song, Justin sang, “We missed you on the charts last week/ Damn, that’s right you wasn’t there/ Now if se-sexy never left, then why is everybody on my s**t/ Don’t hate on me just because you didn’t come up with it.”

Those lyrics were a dig at Prince who made an offhand comment about Justin’s song “Sexy Back” during a performance at a post-Emmy Awards party in 2006.

Prince was reported to have said, “For whoever is claiming they are bringing sexy back, sexy never left!”

Then, in January 2007, Timberlake gave the award for Best Original Song at the Golden Globes. Prince was the winner for his track “Song of the Heart” from the animated movie Happy Feet. Prince wasn’t able to get to the show in time to accept the award because he was stuck in traffic.

Timberlake accepted the Golden Globe award on his behalf and made fun of Prince’s height.

The halftime performance by Justin Timberlake, which did not feature a Prince hologram, was widely panned by critics and social media users alike.