NFL player's tragic death is being used a wedge in Trump's war on immigrants. 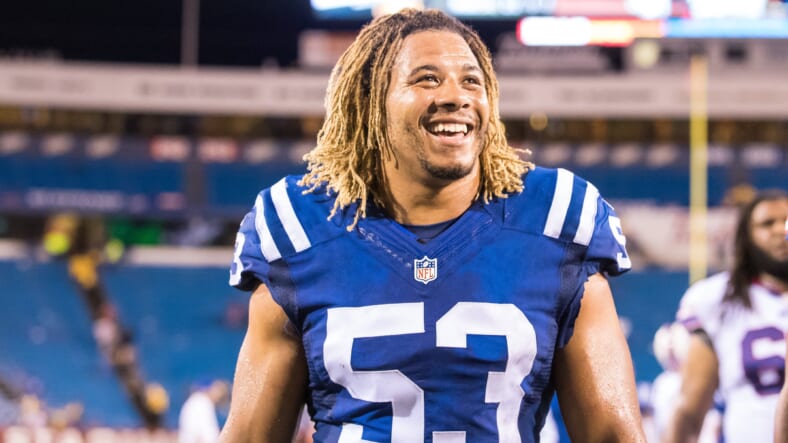 On Sunday, Edwin Jackson, a linebacker for the Indianapolis Colts, was killed after being hit by a drunk driver.

That in itself was a tragedy, but what followed was an example of political spectacle.

“So disgraceful that a person illegally in our country killed @Colts linebacker Edwin Jackson. This is just one of many such preventable tragedies. We must get the Dems to get tough on the Border, and with illegal immigration, FAST!” Trump tweeted first thing on Tuesday.

So disgraceful that a person illegally in our country killed @Colts linebacker Edwin Jackson. This is just one of many such preventable tragedies. We must get the Dems to get tough on the Border, and with illegal immigration, FAST!

According to initial police reports, authorities believe that Jackson, 26, had become sick while traveling with ride sharing operator Jeffrey Monroe, 54.

Police believe that Monroe pulled over to the shoulder along the side of Interstate 70 in Indianapolis just before 4 a.m. on Sunday, and that’s when a suspected drunk driver plowed into the rear of Monroe’s car.

Both Jackson and Monroe were killed.

Police identified the driver of the truck that hit Jackson and Monroe as 37-year old Manuel Orrego-Savala. Although Orrego-Savala attempted to flee the scene on foot, he was later apprehended.

His immigration status has now become the focus of an administration determined to paint immigrants as dangerous.

This isn’t the first time that Trump has tried to paint immigrants as criminals and terrorists. Now, Jackson is part of a larger narrative pushed by the Trump administration suggesting that immigrants are dangerous and therefore need to be kept out of the country.

Most recently, Trump came under fire for his State of the Union speech, in which he tied immigration to gang violence.

But as the New York Times noted, census data has shown that “among men ages 18 to 49, immigrants were one-half to one-fifth as likely to be incarcerated as those born in the United States.”

Yet Trump and his administration will continue to pursue stories of crimes committed by immigrants in order to gain support for their harsher immigration policies.

Unfortunately, Jackson’s death is now being used as a political prop for the administration. And that’s disgraceful.