They made to the Games! Celebrate and congratulate these amazing competitors.

Let’s face it: as far as Olympic competition goes, the Winter Games have always been a little sister to the athletic fanfare and exotic locals that are highlighted during the summer.

Even with that said, if you ignore this year’s Winter Olympics, you’ll miss your chance to see some of the best Black athletes in the world compete at the highest level ever in sports that we traditionally have never dominated. From history makers like the Nigerian Bobsled Team to newcomers like Alpine skier Shannon Ogbani Abeda to Olympic legends like Shani Davis, the Pyeonchang games are a must-watch.

Here’s our guide to the Olympians you need to know and watch.

Where He’s From: Canton, NY

How He Became an Olympian: Greenway was a member of the Boston University hockey team, World Junior Hockey championshp team (2017, USA), and has now become the first and only African-American member of USA Olympic team.

Why He’s One To Watch: This young prince of the ice stands at 6-foot-5 and an athletic 230-pounds. He will celebrate his 21st birthday during the winter competition (drinks on us!) in Pyeongchang and he may actually have an easier path to birthday gold than prior U.S. Olympic squads. Unlike in past years, the National Hockey League did not allow its members to participate in the 2018 games. Greenway, fortunately, won’t have to skate by names like Sidney Crosby (Canada), Alex Ovechkin or Evgeni Malkin (Russia), to take the podium.

Where She’s From: Accra, Ghana

How She Became an Olympian:  She won the women’s 500m at the U.S. Olympic Team Trials.

Why She’s One To Watch:  Biney is only the second Black person, and first woman, to qualify for the US Olympic speed skating team, so it’s impossible not to root for her. Add that to a mega-watt smile and her seemingly endless positivity, and you can see why she’s an automatic crowd favorite. She moved to the U.S. at 5 years old and fell in love with figure skating which quickly turned into a passion for speed skating by the time she turned six. While Biney hopes to become a chemist after her Olympic days, we see gold around her neck in the future.

Lauren Gibbs is headed to her first Olympics this winter. (Courtesy of @nbcolympics on Facebook)

Where She’s From: Denver

How She Became an Olympian: Gibbs won a Bronze medal at the IBSF World Cup in Koenigssee, Germany last month. She finished just 0.32 seconds behind Germany’s winning team.

Why She’s One To Watch:  As the “push” and power in the women’s two-person bobsled competition, Gibbs is responsible for giving the sled momentum before hopping in and leaving it to the pilot to direct them both to the finsish line. Word on the street is that Gibbs can deadlift 425 pounds. With her strength and bobsled partner and pilot, Elana Meyers Taylor’s expert direction, we see them both on the highest pedestal possible at the Winter Olympics.

Where They are From: Chicago (Adigun), Mesquite, Texas (Onwumere), St. Paul, Minn. (Omeoga)

How They Became an Olympians: Adigun is a former three time collegiate All-American sprinter and Nigerian national champion; Onwumere is a 2015 All-Africa Games 4×100 meter gold medalist; and Omeoga is a former University of Missouri sprinter.

Why They Are Ones To Watch: By now the world knows their story, but just in case you are completely unaware of all this #BlackGirlMagic, these three former world-class track and field stars are American born, but Nigerian raised athletes. They got together to train and form the first Olympic bobsled team (male or female)  to represent any country in the history of the African continent. They qualified for the Winter Olympics last year and now have a shot at medaling. They are competing for more than just Olympic gold. This is about sisterhood, pride, and honor.

Where He’s From: East Orange, NJ

How He Became an Olympian: After winning five shows and three titles in physique (bodybuilding) competitions, Abdul-Saboor won the 2017-2018 Two-Man World Cup with pilot Nick Cunningham.

Why He’s One To Watch: Besides being an underdog who joined bobsledding in 2015, Abdul-Saboor also has experience playing basketball, football and all-around track and field. And if fans Google some of Abdul-Saboor’s bodybuilding photos it will surely be enough to compel you to turn on your TV to watch the Winter Olympics and pray for some Team USA medals. 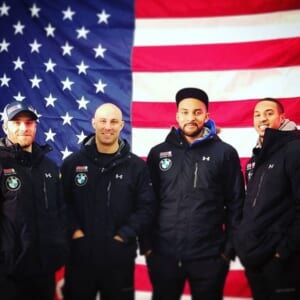 Where He’s From: Stockbridge, GA

How He Became an Olympian: Kinney is a Georgia native and a former All-American hurdler at Georgetown University. He trained by lifting weights to become a push athlete and qualify for the men’s United States’ Olympic bobsled team.

Why He’s One To Watch: If Kinney and his teammate Hakeem Abdul-Saboor are successful, they will be the first African-American men to mount the podium in Olympic bobsledding history.

Bobsledder Aja Evans poses for a portrait during the Team USA Media Summit ahead of the PyeongChang 2018 Olympic Winter Games. (Photo by Tom Pennington/Getty Images)

Where She’s From: Chicago

How She Became an Olympian: Bronze medalist at 2014 Winter Olympics

Why She’s One To Watch: Evans is getting a second shot at the Winter Olympics pedestal, and this time we hope it’s gold, rather than bronze, that she brings home.

Where He’s From: Kumasi, Ghana

How He Became an Olympian: Frimpong made history by breaking the Utah Valley University record in 4×100 meter relay.

Why He’s One To Watch: Frimpong failed to qualify as a Dutch track and field athlete in 2012, so he began competing in bobsledding in 2014. Now that he has finally made it to the big stage, it would be great to see him do big things at the Winter Olympics.

Where She’s From: Ocala, Fla.

How She Became an Olympian: Jackson is a World Championship speedskating/roller sports medalist.

Why She’s One To Watch: Ten medals is nothing to sneeze at, but winning an Olympic medal, especially gold, would cement Jackson as an all-time great at her sport.

Where He’s From: Winston-Salem, N.C.

How He Became an Olympian: In addition to being a world-class speed skater, Griffin is a classically-trained guitarist who has performed at Carnegie Hall.

Why He’s One To Watch: Wouldn’t it be great if Griffin won Gold, mounted the podium during the Winter Olympics with his guitar and played an acoustic rendition of Kendrick Lamar’s “Black Panther title track? We can dream, can’t we?

Bobsledder Elana Meyers Taylor poses for a portrait during the Team USA Media Summit ahead of the PyeongChang 2018 Olympic Winter Games. (Photo by Ezra Shaw/Getty Images)

Where She’s From: Douglasville, GA

How She Became an Olympian: Meyers-Taylor has made two prior Winter Games appearances including a Silver Medal in 2014

Why She’s One To Watch: We would love to see Meyers grab that elusive gold medal in what is likely her final Olympic appearance. Afterward, she says she plans to dedicate much of her energy to concussion research and will even offer her brain for medical research when she passes on. Talk about teach what you preach.

Where He’s From: Chicago

How He Became an Olympian: Davis is a two Olympic gold medal winner, a two-time silver medal winner and has competed in four Olympic Games.

Why He’s One To Watch: Davis has given Team USA some of its biggest victories over the course of his career. This year is probably his swan song, so it would be great for him to get one more top honor for the road.

Where She’s From: Kilifi, Kenya

How She Became an Olympian: Competed in the 2016 Winter Youth Olympics in Lillehammer, Norway.

Why She’s One To Watch: While Simader isn’t American born, we are still rocking with her. Why? She’s the first woman and first Alpine skier ever to represent Kenya in the Olympics.