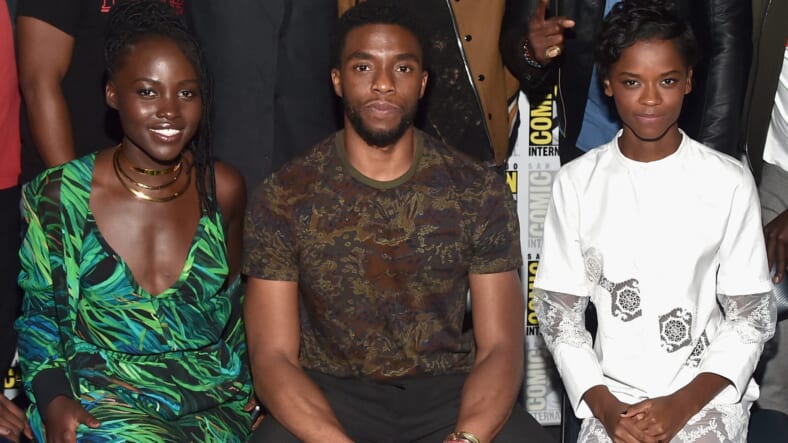 The cast of Black Panther heard about that banned Facebook group that wanted to flood Rotten Tomatoes with bad reviews of their movie, but they aren’t worried about a bunch of haters.

Chadwick Boseman, who plays the titular Black Panther, said that he heard about the reports of the group, which has since been banned by Facebook, but that he doesn’t really read reviews in general, so he didn’t think much of it.

“I definitely thought about it, and I think you don’t really know how big of an impact that’s going to be,” he told the Associated Press. “So whatever they do online doesn’t really matter.”

Letitia Wright also spoke out about the group, saying, “Shame on them. Everybody is just focused forward. Those people are at the back.”

The Facebook group, Down With Disney’s Treatment of Franchises and its Fanboys, was apparently not happy with Disney’s Marvel franchise and how well it’s doing compared to the DC Cinematic Universe.

So, they decided to come after the biggest, Blackest movie of the year with a group called “Give Black Panther a Rotten Audience Score on Rotten Tomatoes.”

“Given the massive success of the audience review rigging on the Rotten Tomatoes site for ‘Star Wars: The Last Jedi,’ and due to the sudden rise in those disgruntled with Disney business practices among other factors especially due to the corporate manipulations which created falsified bad press for the DCEU, I feel that it’s time to strike back at all those under Disney and bring down the house of mouse’s actions for paying off the critics that hurt DC Comics on film and for other parties affected by them,” wrote the event creator.

This isn’t the first time the group has done this, either. They also hit Rotten Tomatoes with bad reviews for The Last Jedi.

Why? Well, the self-described alt-right moderator told HuffPost that he hated the fact that Star Wars had so many women in it now. So we can only imagine how much he must hate the bold, beautiful women in Black Panther, not to mention its unapologetic Blackness.

Rotten Tomatoes responded to the group in a statement, saying, “We at Rotten Tomatoes are proud to have become a platform for passionate fans to debate and discuss entertainment and we take that responsibility seriously. While we respect our fans’ diverse opinions, we do not condone hate speech. Our team of security, network and social experts continue to closely monitor our platforms and any users who engage in such activities will be blocked from our site and their comments removed as quickly as possible.”

Black Panther, the biggest, Blackest movie of the year, is set to hit theaters on February 16, and despite the haters trying to take it down, we can’t wait to see it.