Law enforcement and prosecutors allegedly treated neo-Nazis as the victims during racist rally. 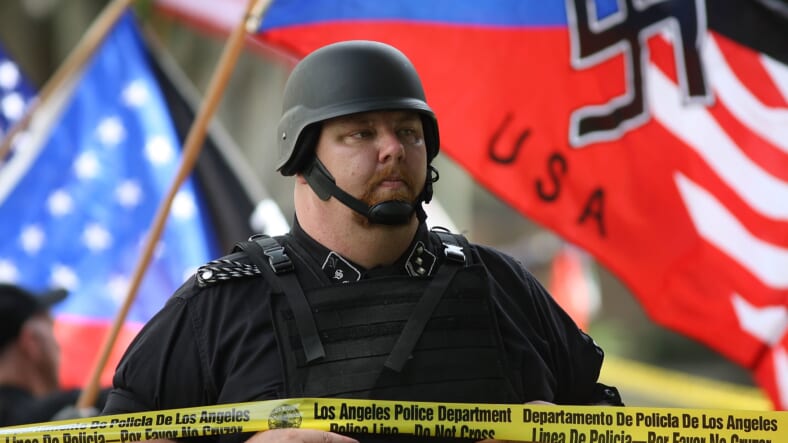 Three anti-fascist activists are now urging a judge to dismiss the felony charges against them because they say California police and prosecutors engaged in a “cover-up and collusion with the fascists.”

According to defense lawyers, California police investigating a June 2016 Sacramento rally treated neo-Nazis as the victims and went after the protesters who had come to rally against the white supremacists.

“It is shocking and really angering to see the level of collusion and the amount to which the police covered up for the Nazis,” said Yvette Felarca, who was charged with assault and rioting after protesting at the rally, despite being bludgeoned in the head and stabbed herself, according to The Guardian.

The defense attorneys were able to obtain records of the California Highway Patrol (CHP) working with the neo-Nazi Traditionalist Workers Party (TWP). In one interaction, for example, CHP investigator Donovan Ayres treated an anti-fascist protester, who had been stabbed, like a suspect instead of a victim.

Ayres claimed that the activist’s Facebook pictures showing him raising the Black power salute and his history of activist showed his “intent and motivation to violate the civil rights.” He hit the man with 11 different charges, including disturbing the peace, conspiracy, assault, unlawful assembly and wearing a mask to evade police, though the activist was not charged.

“This is a textbook case of a political witch hunt and selective prosecution,” Shanta Driver, one of Felarca’s attorneys, said.

While the CHP has not commented on the reports, prosecutors have argued that “no one is beneath the protection of the law, no matter how repugnant his or her rhetoric or misguided his or her ideals.”

In the prosecution’s response, which was filed on Thursday, prosecutors also claimed that the anti-fascist activists were “making a political statement” and that they hadn’t cooperated with investigators.

“Despite the fact that we have not gained the cooperation of these victims, the investigation to hold their attackers responsible continues forward.”