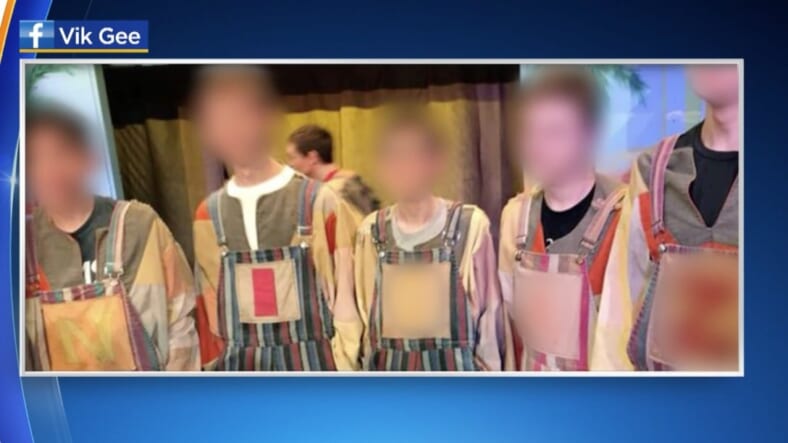 A Chicago high school has canceled a play after five white students posed for a photo wearing garments that spelled out the letters of a racial slur.

Some parents of Evergreen Park Community High School students are up in arms and calling for the perpetrators to be disciplined.

Laquetta Johnson has a daughter who is a junior at the school and says she explained that the slur was targeting the only black student who was cast as a slave in the current production of the play “Joseph and the Amazing Technicolor Dreamcoat.”

“They would taunt him daily during the production. And this particular day they decided to line up like this and spell that word out,” Johnson stated.

The school itself is racially diverse with half of the students being white and over one-third of them black.

“They’re kids and they’re stupid,” said Marlon Hayes, whose daughter is a senior at Evergreen Park. “I don’t think that these children are racist, I just think they’re children who don’t know any better. Ignorance played more of a factor than anything else,” he said of the racial slur being used.

Some of the school’s black students protested the racial slur on Monday wearing black and sending a statement to CBS 2 that read, “With the picture, [we] feel like it was completely disrespectful, and [we] think they knew what they were doing.”

When the racist image went viral administrators at the school made the decision to cancel the play and called parents.

“We will be finalizing our investigation in the next few days and those involved will be disciplined accordingly,” the school’s superintendent, Thomas O’Malley, stated. “We are implementing several avenues to address awareness surrounding sensitivity for all of our students. As I previously mentioned, we have a very diverse and caring student body. There is no room in our school for disrespect towards any students. These types of actions will not be tolerated in Evergreen Park Community High School.”