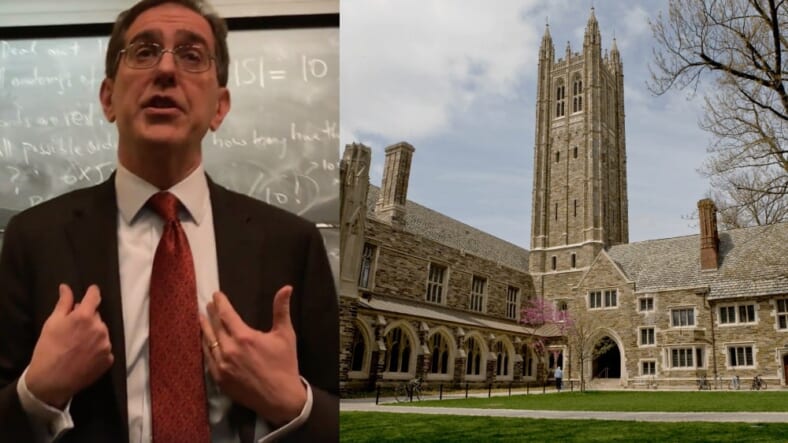 TRENTON, N.J. (AP) — A Princeton University professor canceled a course he teaches on cultural freedoms and hate speech after his use of a racial slur during a class discussion led some students to walk out.

Colleagues say Professor Emeritus Lawrence Rosen has often used the slur during lectures on free speech. They say this is the first time he’s received such a negative response from students.

Rosen refused a demand from several students to apologize and argued with at least one student. Two students later filed a complaint with school officials.

The university later issued a statement defending Rosen. The professor and the students did not respond Tuesday to a request for comment.

“The values of free speech and inclusivity are central to Princeton University’s mission and critical to the education we provide to our students,” the statement said. “The conversations and disagreements that took place in the seminar led by Professor Rosen (last week) are part of the vigorous engagement and robust debate that are central to what we do.”

The school said it will continue “to look for ways to encourage discussions about free speech and inclusivity with the students in Professor Rosen’s class and the campus community more broadly.”

Speaking Monday night at a town hall meeting with students that had been scheduled before the controversy erupted, university president Christopher Eisgruber said he respected Rosen’s decision to use the word, citing the importance of having conversations where people feel “uncomfortable.”

“I think it’s very important for our culture to have academic freedom that allows people to have pedagogical choices on how to teach difficult subjects,” Eisgruber said on the video posted on Facebook by The Tab .com. “I respect Professor Rosen’s decision about how to teach the subject in the way that he did by being explicit and using very difficult words.”

Carolyn Rouse, chairwoman of Princeton’s Anthropology Department, who is black, wrote a letter to the editor of the The Daily Princetonian defending Rosen’s use of the slur. She wrote that by the end of the semester, Rosen hoped his students would be able to argue why hate speech should or should not be protected using an argument other than “because it made me feel bad.”

Noting that Rosen has used the same example year after year, Rouse said this was the first year he got the response he did from students.

“I feel bad for the students who left the class not trusting the process,” Rouse wrote. “Rosen was fighting battles for women, Native Americans, and African-Americans before these students were born. He grew up a Jew in anti-Semitic America, and recognizes how law has afforded him rights he would not otherwise have.”