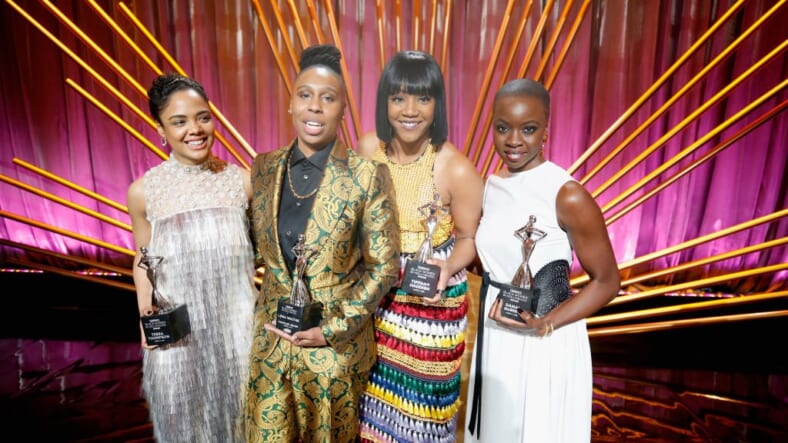 The Essence Black Women in Hollywood Oscars Luncheon went down on Thursday afternoon and brought out the best in the business when it comes to serving up style, grace, and sisterhood. So many of our favorite ladies turned up for the annual event at the Regent Beverly Wilshire in Beverly Hills that #BlackGirlMagic would be an understatement at best.

Check out some of the beautiful black women (and a few men too) who attended the star-studded event sponsored by Ford.

Amanda Seales and Estelle stop for some seriously stylish selfies in their black and sequined ensembles.

She’s Gotta Have It star, DeWanda Wise and How To Get Away With Murder‘s Amirah Vann serve up their best stares.

Jussie Smollett and Jurnee Smollett-Bell may be the best-dressed brother-sister duo in Tinseltown.

Power To The People

Insecure star, Yvonne Orji,takes the stage and throws up a fist in a multi-colored, sequined blazer.

Chloe x Halle took the stage several times during the annual luncheon and the siblings were looking lovely while sharing their soulful sounds.

It looks like a few fellas made it into the room full of powerful females after all. Lil Rel Howery and Daniel Kaluuya showed some support for the sistas.

A Wrinkle In Time director, Ava DuVernay, spoke passionately at the podium and donned a very colorful dress and her signature dreads.

Lala Anthony couldn’t be any cuter in a pink, one-shoulder gown and perfectly styled ponytail.

Angela Bassett‘s style game is almost as on point as her acting skills. This time, she slayed in an all-white ensemble and let her big hair have a major moment.