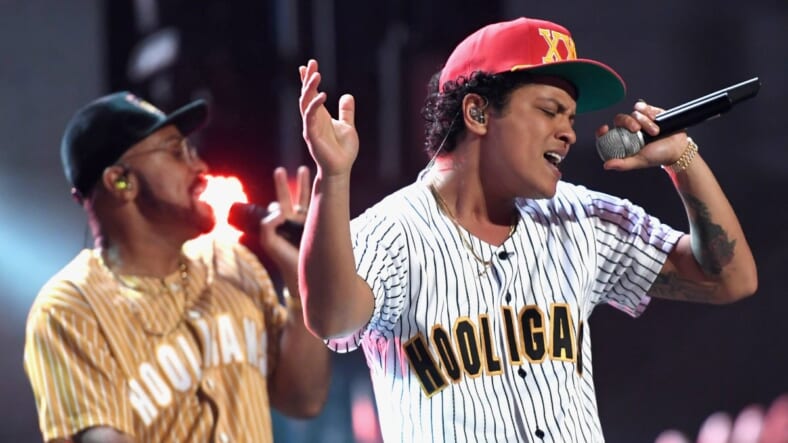 It didn’t take long for Bruno Mars fans to come to his defense after the Grammy-winner was accused of making music that was culturally appropriated from black culture.

The debate started with the comments writer Seren Sensei’s made in a video she made for YouTube’s The Grapevine. That video has since gone viral.

– Study: Black Twitter Matters to the news media (although they don’t admit it) –

“Bruno Mars 100 percent is a cultural appropriator,” she said on the web-series that covers identity, entertainment and politics from the black millennial perspective. “He is not black, at all, and he plays up his racial ambiguity to cross genres.”

Mars is multiracial, was born in Hawaii to a father who is half Puerto Rican and half Ashkenazi Jewish and a mother who is Filipino.

“What Bruno Mars does, is he takes pre-existing work and he just completely, word-for-word recreates it, extrapolates it,” Sensei argued. Her point was that Mars creates music that would fit into traditional black genres like R&B, funk, soul, and hip-hop.

May Bruno Mars fans were put off by the accusations. They felt that this was not a label that applied to Mars specifically.

“Except Bruno Mars credits the originators, which is a core issue with cultural appropriation. He’s not taking black culture away from black people a la Elvis Presley, he’s performing in that space whilst contributing to and crediting the black community. It’s not the same thing,” one Twitter user wrote.

Yet another, said that there are many other music celebrities with a much more problematic history. “When I think of cultural appropriators, Miley Cyrus, Justin Timberlake & Iggy Azalea come to mind, not Bruno Mars,” the fan posted.

The debate raged on social media, with Bruno Mars trending in the top spot on Twitter.

Some were quick to point out that while, yes, part of his success can be attributed to the fact that the music industry doesn’t reward black musicians, but they felt it wasn’t fair to criticize Mars himself for it.

“Bruno Mars is definitely a talented and successful artist who is influenced by funk music, New Jack Swing, and the Black artists who came before him. I just wish the music industry would also sign & promote more Black artists singing Black music because they deserve success too,” said one social media user.

Another went on to say, “People can’t complain about Bruno Mars ‘appropriating Black music,’ when it’s Black people who abandoned the old school R&B/funk genre that we created. We have a bad habit of that. Then we won’t find it relevant until white people think it’s relevant.”

Not gonna stand for this @BrunoMars slander. The irony of this woman calling Bruno Mars a cultural appropriator while going by the name Sensei Aishitemasu. Bruno has paid homage to black music publicly and is undeniably talented. Fake woke people need to find a new hobby