Activist and author Feminista Jones created the #YouOkSis hashtag/movement as a pro-active measure to curb the rampant street harassment experienced by Black women.  But over the weekend, a Pennsylvania venue tweeted out the hashtag on a flyer featuring five non-Black women. The promotional material was for a fundraising concert that would benefit a local domestic violence shelter. 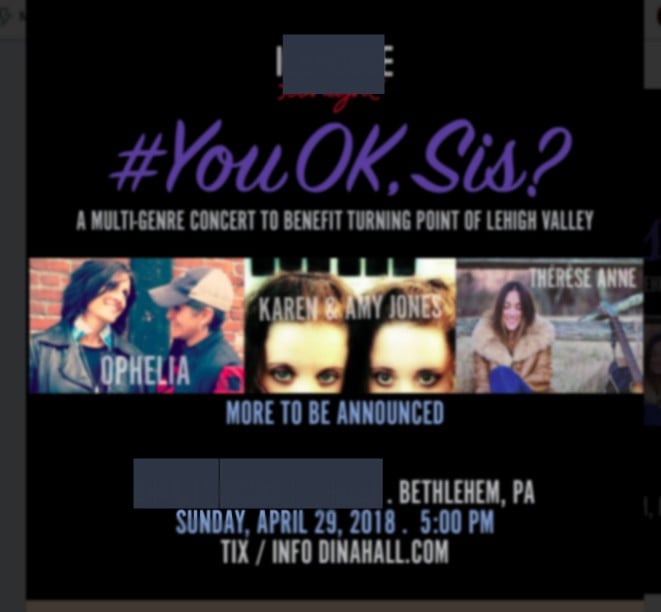 Jones is of course an advocate for women in domestic violence situations receiving assistance, but she has also been very straight forward about how she wants the #YouOkSis hashtag to be utilized.

“So I want folks to be clear: A lot of folks have used the tag and have talked to me about it and it’s love. They 1) don’t use it to raise money 2) center Black women. That’s all I ask. I’m not asking too much,” posted Jones on Twitter.

So I want folks to be clear: A lot of folks have used the tag and have talked to me about it and it’s love. They 1) don’t use it to raise money 2) center Black women. That’s all I ask. I’m not asking too much.

That hashtag/ campaign/ movement was not meant to be used to serve the interests of White Women, especially not financially

Like, we discuss DV too, but:
1) Don’t use it to raise money
2) Center Black women

I don’t ask for much https://t.co/qsAAdWWhkR

Jones recognized that the venue/promotor co-opting her work is just one part of the larger systemic issue of Black women’s labor being under-appreciated and appropriated at will.

Many of Jones’ friends and supporters weighed in on Twitter to express their disgust with the situation.

I’m all for stopping street harrassment, but this is just lifting the work of black women and cutting them out of the picture. Pack it in, please. pic.twitter.com/SUZvw9L6jS

This whole movement was the work of @FeministaJones#YouOkSis is intellectual property of hers, and centers the harassment, rape, sexual assault, and murder BLACK women face from street harassment.

It is not ok to have a concert, centering white women & stealing her work. https://t.co/zsNmUQA9JQ

As of press time, the flyer in question was still circulating online.

#YouOkSis launched online in July of 2014 with the specific goal of addressing street harassment of black women with possible solutions.

“I define street harassment as any unwanted attention from strangers that makes a person feel uncomfortable,” said Jones in an exclusive interview with theGrio.

The idea for #YouOkSis was born when Jones intervened in a street harassment incident on behalf of a young mother pushing a stroller.

The #YouOkSis movement is supposed to inspire people of both genders to intervene in street harassment situations by engaging with the victim of said harassment.  “If you just talk to the person who is the focus of the harassment, you’re placing yourself in that moment and giving that person an out. It’s something that breaks up the situation and diverts attention from the victim,” said Jones in reference to not placing one’s self in harm’s way while intervening.

The word “sis” is a word that is fairly specific to the Black community, and Jones addressed why her focus is on black women.

“A lot of the conversations about street harassment in the mainstream media only show white women as the faces of victims. Rarely do you see Black women as the face of the victim,” said Jones.

When #MeToo re-emerged last fall, ripping away the careers of longtime sexual predators in Hollywood, media, and beyond, many people credited actress Alyssa Milano with creating the #MeToo hashtag.

However, activist Tarana Burke (a Black woman) created the #Metoo movement a full decade earlier and has been diligently fighting for the cause in the years since. Milano has publicly and repeatedly acknowledged that she just sent a tweet, but Burke actually did the work to create the movement.

The same way that media outlets were ready to package Burke’s hard work as Milano’s, the promoter behind this fundraising concert is hijacking Jones’ work, re-purposing it for white women, and disrespecting Jones’ simple directives on how to use her creation.