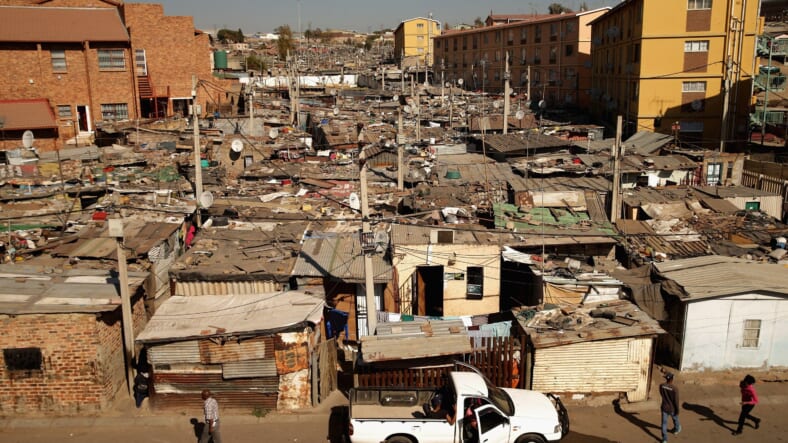 South Africa’s government is reporting that the country still suffers from instability and rampant poverty.

A World Bank report revealed the results of a probe which states that from 1994 to 2015, a disproportionate number of South Africans — a staggering 75 percent — are still considerably poor. Only one in four, the report says, had the means to be deemed “middle class” or “upwards.”

The report, which examined the nation’s economic status, falls short of the government’s expectations and is disappointing, government officials said, according to South Africa’s Independent Online. It was commissioned in 2016 as a collaborative partnership by the bank and the country’s institutions, including Statistics SA and the results were presented on Tuesday to Minister for Planning, Monitoring and Evaluation Nkosazana Dlamini Zuma.

“Half of South Africans during the 2008 to 2014/15 period were considered chronically poor or having average consumption below the upper bound poverty line. At least 78% of South Africans were in poverty at least once during this period,” said the World Bank’s Dr Paul Noumba Um.

Um pointed out that poverty increased between 2011 and 2015 and at that time some 2.5 million more South Africans slipped into the depths of poverty. The nation’s Black population is reported at 79.2 percent.

South Africa stands now as Africa’s most impoverished and unequal society, according to the report.

Another disturbing finding is that the financial divide deepened during South Africa’s transformation into a democratic nation.

South Africa’s new president Cyril Ramaphosa has already spoken to the parliament about how he hopes to improve the country to better the lives for all of its citizens.

He also promised to do his best for his country, saying, “South Africa must come first in everything that we all do.”

While Ramaphosa has said that he hopes to improve the economy for his country, he has at times come under fire for being tone deaf when it comes to issues of poverty. For example, he once bid $2.1 million on a buffalo cow in 2012 during an auction. He also came under fire for reportedly calling in police during a strike on a platinum mine where he was a board member. During the August 2012 strike, 34 people were killed by police.

Ramaphosa is also inheriting a major problem in Cape Town. On June 4, the capital city is expected to become the first major modern city to run out of municipal water.

Most controversially, he has proposed seizing land from white farmers and redistributing it to Black citizens to make up for acres being taken from tribal people in the 17th century.

Dlamini Zuma said the findings about South Africa’s socioeconomic conditions are not surprising and the country has some major work to do in order to turn the tide.

“Clearly we have not done very well in these triple challenges of poverty, unemployment and inequality. We should now make skills a priority because, as the study shows, they will assist in reducing these challenges.”