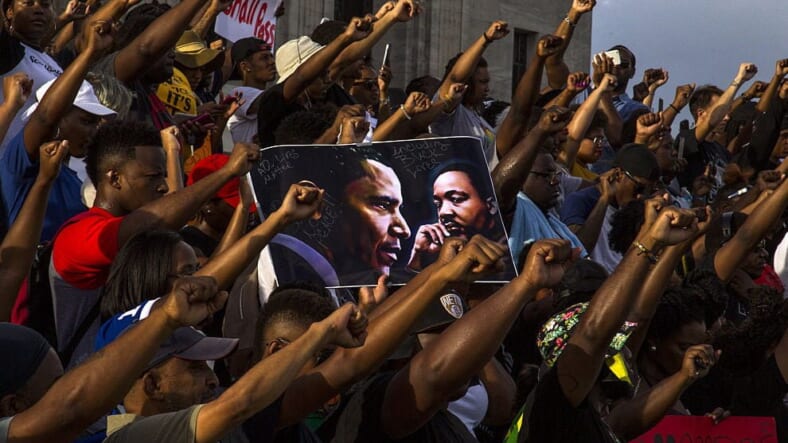 BATON ROUGE, LA -JULY 09: Demonstrators gather after marching at the Louisiana Capitol to protest the shooting of Alton Sterling on July 9, 2016 in Baton Rouge, Louisiana. Alton Sterling was shot by a police officer in front of the Triple S Food Mart in Baton Rouge on July 5th, leading the Department of Justice to open a civil rights investigation. (Photo by Mark Wallheiser/Getty Images)

President Donald Trump usually doesn’t have a lot to say about the Black community. In fact, he continues to completely ignore the needs of people of color on a daily basis and that includes the police shootings of unarmed black men and women.

Today, the city of Sacramento weeps over the death and prepares for the funeral tomorrow of Stephon Clark, the 22-year old Black man who shot in his own backyard by local police. In Baton Rouge, Black folks remain stunned by the announcement that the state of Louisiana will not file charges against the two white officers who killed an unarmed Alton Sterling. It was already hard enough to learn in May 2017 that the U.S. Justice Department would not bring civil rights charges against these officers. Justice often only exists once there is an investigation sourced at the federal level, and now both national and local authorities have failed our community again.

During Wednesday’s briefing, White House press secretary Sarah Sanders said Trump believes police shootings of unarmed Black people are a “local matter” that “should be left up to the local authorities,” according to CNN.

“Certainly, a terrible incident. This is something that is a local matter and that’s something that we feel should be left up to the local authorities at this point in time,” said Sanders in response to the fatal police shootings of Sterling in Louisiana and Clark in California.

A plan for all Americans

As these stories continue to rock the black community, the national outcry grows louder. Yet, the President of the United States has seemingly turned a deaf ear to what the country needs most—comprehensive reform and criminal accountability for local law enforcement who shoot Black people first and ask questions later.

“The President is very supportive of law enforcement, but at the same time in these specific cases and these specific instances, those will be left up to the local authorities to make that determination,” said Sanders who then swiftly changed the subject to the President’s economic and security policies that she said benefit all Americans.

“I think we should do every single thing we can every single day to protect the people of this country,” said Sanders. “Whether they’re black, white, Hispanic, male or female, rich or poor, we look for ways to protect individuals in this country, particularly children.”  She said the aforementioned with no irony.