Teyana and Iman seem to be raising a superstar 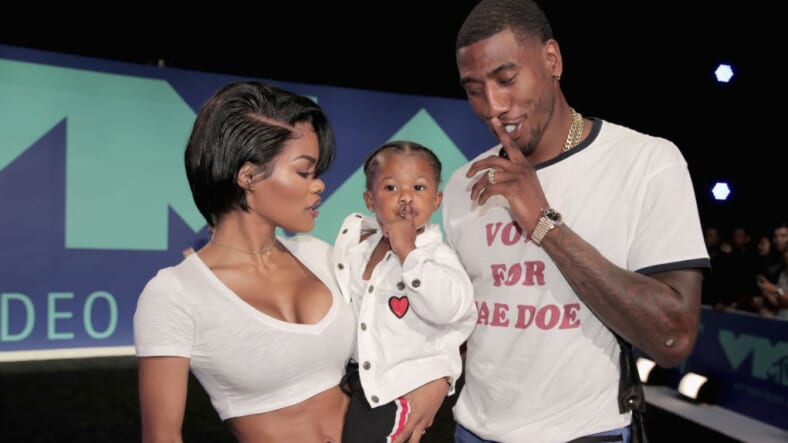 Besides teasing new music from an album, slaying her everyday wardrobe attire, and making everyone sick with jealousy from that banging body, Teyana Taylor and her hubby Iman Shumpert recently premiered their new Vh1 reality show, Teyana & Iman.

The beautiful married couple, both 27, originally gagged the world in 2016 when they appeared in Kanye West’s “Fade” video in a steamy shower scene, and inquiring minds have been going nonstop ever since.

In conversation with People, the songstress-mama opened up about what it’s like in their bedroom.

“What I live by is that if everything is perfect 24/7, sex would eventually get boring,” said Taylor. “We like the mad sex, the attitude sex, the passionate sex — this is what it’s for.”

Another factor in their love life is the love of their lives, their 2-year-old Iman Tayla Shumpert, Jr., nicknamed Junie. The couple made headlines following their daughter’s birth in December 2016 after she popped out unexpectedly while the couple were at home in their bathroom. Just them two, Iman assisted with the delivery as Teyana pushed, and the new father controversially held the umbilical cord with his Beats headphones.

Today, their reality has completely changed.

“Even in parenthood I had to learn that like there’s no such thing as a perfect parent,” Taylor said. “It’s not really like a right or wrong — you just learn.”

Family: even when they’re drivin you crazy, they’re always on your team. Who’s someone who has always been there for you? ?⠀ ⠀ Catch @TeyanaTaylor and @ImanShumpert on the premiere of #TeyanaAndIman TONIGHT 9/8c on @VH1!

Junie is a Star

“She’s the star of our whole world,” Taylor continued. “Honestly, like one thing we want to do is give Junie the freedom to do whatever it is her little mind desires because sometimes she’s singing and she’s playing in makeup and she’s putting on lipstick and she’s dancing, but then she’ll turn around, pick up a basketball and she’s trying to hoop. She’s tall.”

“We don’t know if she’s gonna be a basketball player or model, singer, businesswoman — whatever it is, I always want to give her the opportunity,” she added.

“I was in the studio — me and Meek Mill did a song together — and [Junie] actually got engineer credit on his album because she was really at the bar with the engineer,” Taylor said. “That’s what I’m saying — she might be an engineer, she might be producer!”

Teyana and Iman’s first season is now playing every Monday at 9/8c on VH1.