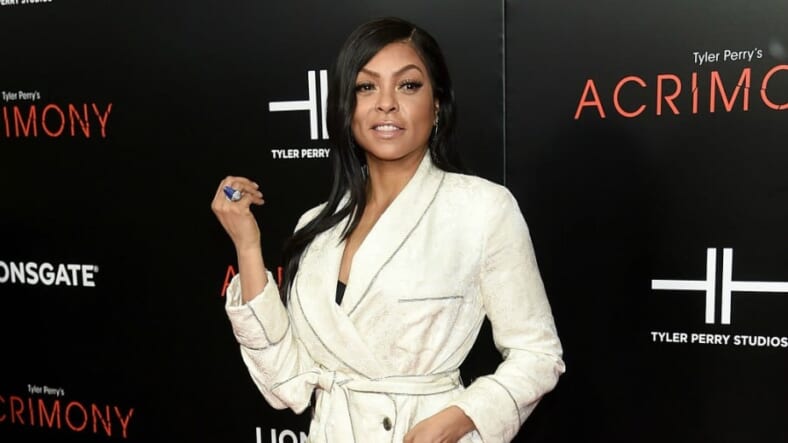 Taraji P. Henson stars as “Melinda” in the Tyler Perry film “ACRIMONY.” Her character becomes enraged when she finds out her husband,”Robert,” played by Lyriq Bent may have been unfaithful throughout their marriage.

During the New York City red carpet, Henson touches on why it was important to deconstruct the “angry black women” stereotype.

“And then in particular with women, [they say] we are whining, we are the “B” word, you know. Why can’t we have a right to say how we feel? That’s what we should all be able to do as humans. So, I think this movie is here to kick the door down on that sh*t.”

Bent also touched on Henson’s character and his role in the film.

“I wouldn’t say that she was my crazy wife,” says Bent. “I think she was my wife that was experiencing a lot of hurt and a lot of pain and my character was oblivious to it. He didn’t see that.”

“Sometimes we don’t communicate properly, especially towards spouses or loved ones, so that they can understand where we coming from and what we need,” says Bent.  “Sometimes we assume that everything is okay, and that’s how I see Robert and that’s the relationship that he had with his wife.”

“One that was neglected in certain ways, and not on purpose, not out of malice,” Bent expresses. “It was just… I guess out of passion and passion is unfortunately a very dangerous and sometimes lonely road to go down.”

“Working with Taraji was incredible. The world loves her, and I love her for a different reason because I know her for more than her characters. As she continues to blossom, and show her range, the world will come to love her the way I do.”

Check out more from the red carpet below.