The incident occurred in Barstow, CA. 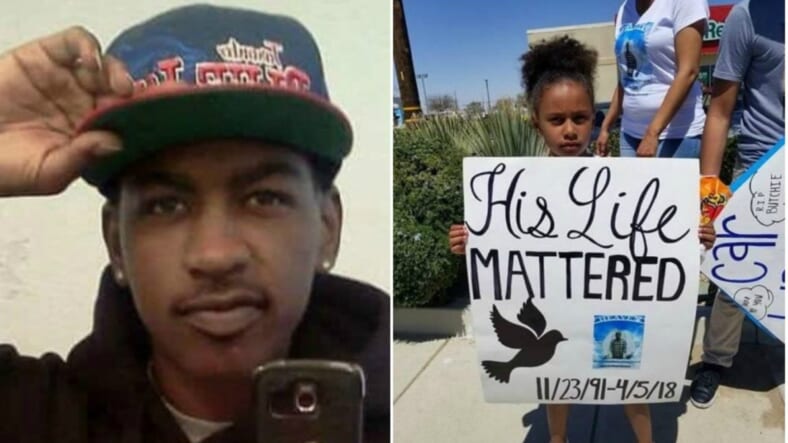 Police in Barstow, CA, are facing public scrutiny for the shooting death of Diante Yarber, after they unleashed a barrage of bullets into his car, killing him and injuring two others while sitting in a Walmart parking lot.

The video of the shooting taken by a bystander and posted by activist Shaun King has gone viral. The 26-year-old father of three was killed as he and three other people sat in a black Mustang that police fired multiple rounds upon in the Barstow, CA, Walmart parking lot. An attorney for Diante Yarber’s family, S. Lee Merritt, estimates there were 30 rounds shot into the vehicle, killing Yarber and injuring two passengers. Backseat passenger Marian Tafoya was critically injured and had to be airlifted for medical attention.

“Diante Yarber was profiled, stalked and murdered by Barstow PD officers,”  said Merritt, in an interview with The Root.

—Money, Power, Disrespect: Will men arrested at Starbucks get money, stock or a franchise?—

Merritt said Diante Yarber’s family plans to sue the City of Barstow and the police.

“This is the worst case of excessive force that I’ve ever seen. From the sheer volume of rounds that were shot at the car, to the circumstances surrounding it,” he said.

“Unless you know they are actively engaging you with gunfire, it’s hard to justify shooting at four people, when at best, the driver was committing the criminal act,” Merritt told the New York Times.

Yarber, “wasn’t complying — and they decided to execute him for it,” he said.

“Barstow Police Officers responded to a call of a suspicious vehicle, a black Mustang, in the parking lot of the Walmart store. Officers arrived and located the vehicle in the parking lot. Officers believed the driver was a subject wanted for questioning in a recent crime involving a stolen vehicle. Officers attempted a traffic stop of the Mustang when the driver suddenly reversed the vehicle and struck one of the patrol cars. When the driver again accelerated toward the officers and struck a second patrol car, the officer involved shooting occurred. Two of the four occupants were struck by gunfire.

The driver was pronounced deceased at the scene. A female passenger suffered gunshot wounds and was airlifted to Arrowhead Regional Medical Center. The two male passengers exited the vehicle during the incident and one of them sustained minor injuries to his lower extremities in the process. Both injured passengers are expected to recover from their injuries.”

This shooting just weeks after Sacramento California police shot down Stephon Clark in his grandmother’s backyard.