Randy Freeman says a manager lied on him. 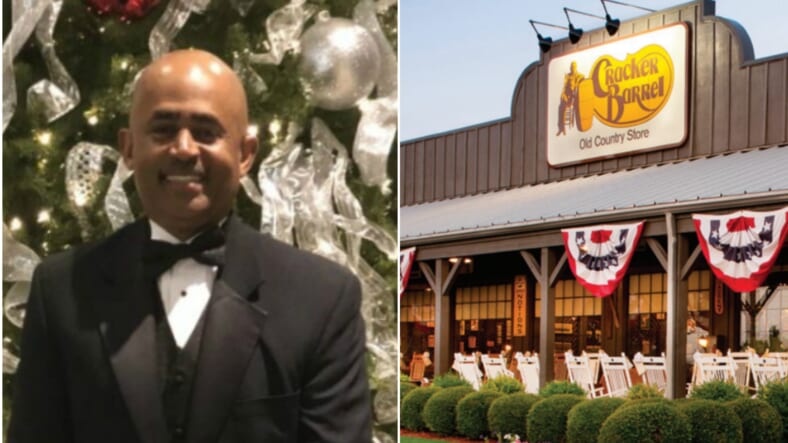 Cracker Barrel is being sued by a Black veteran who says a manager lied on him and kicked him out of the restaurant under false pretenses.

Randy Freeman filed a federal complaint against the company after he says a manager allegedly lied about him cursing at a waitress. Freeman, who owns a motor coach company, says that didn’t happen.

The veteran says he was having dinner with his passengers and was forced to leave the facility when a manager and assistant manager accused him of cursing at a waitress, reports Raw Story. Freeman said he spoke in a “normal” manner and that three witnesses support his claim.

Cracker Barrel has yet to address his complaint. They have only responded through “adversarial court filings,” says his discrimination attorney Sekou Campbell.

“Cracker Barrel has a history of discrimination in its stores,” Campbell noted in the press release, “leading to a nine-year consent decree to remedy customer and employee-based discrimination with the United States Department of Justice.”

The 57-year-old said he ordered a drink, received it and when he tried to order his food from the waitress, a manager instead came and accused him of cursing at the waitress.

His Version of Events

“As a motor coach owner and operator, prior to the incident, I had visited Cracker Barrel’s chain on a number of occasions but not at the store where the incident occurred … I did not experience this kind of unfair treatment in the past,” Freeman said in and interview with Rolling Out. “I was taken completely by surprise when the manager came out and made these false accusations.”

Freeman said he didn’t do anything to alarm the waitress. He said the manager and assistant manger demanded that he leave and he’s calling it a case of racial discrimination, outrageous treatment and defamation of character.

“I was embarrassed and worried about the consequences of resisting my ejectment because I owed my ultimate responsibility to my motor coach passengers who would’ve been stranded had I been arrested for refusing to leave,” said Freeman. “So, I left without raising my voice or otherwise resisting the managers’ commands.”

NRA suggests ‘Waffle House’ hero should have used gun, despite apparently not needing one

“Cracker Barrel has failed to even acknowledge that anything improper was done at their store,” Freeman’s attorney, Campbell, explained.

“Mr. Freeman fought for this country against forces trying to take away Cracker Barrel’s right to have a business and its employees to enjoy America’s freedoms. He has certainly earned the right to enjoy those same freedoms,” said Campbell. “Simply dignifying that existence with a serious response and acknowledgement of wrongdoing is not an overly cumbersome task given Mr. Freeman’s sacrifices.”