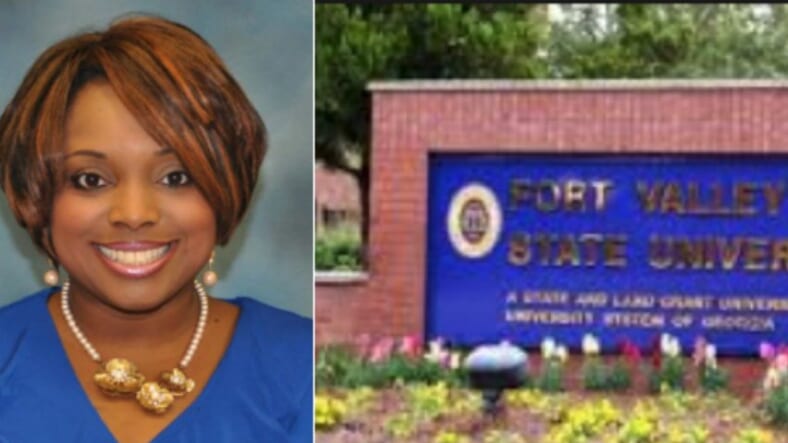 Alecia Johnson has resigned from her position at Fort Valley State University amid AKA sex scandal. (WSBTV)

In the wake of a shocking sex scandal investigation that has rocked the Alpha Kappa Alpha sorority on the campus of Fort Valley State University, WSBTV revealed that the University president’s former executive assistant Alecia Johnson is the employee at the center of the storm and Johnson has resigned from her job.

“Greetings Dr. Jones, I find it best under the circumstances to render my resignation, effective immediately. Please have my personal belongings packed and mailed to the address listed or I can have someone pick them up next week.”

Jones reportedly said he would comply and have her things packed and ready for pickup, WSBTV reports.

The Georgia Bureau of Investigation is currently conducting an investigation of Fort Valley State University that involves the Alpha Kappa Alpha sorority, but there’s been speculation and some confusion surrounding what the actual allegations are.

It has been reported that an employee and member of the Alpha Kappa Alpha sorority was allegedly involved in a “sex ring” at the university. The sexual misconduct allegations has the school’s campus swirling

It was first reported by the Atlanta Journal Constitution that the historically Black school was being investigated for hazing allegations and sexual misconduct orchestrated by an employee. GBI Special Agent J.T. Ricketson was giving up bits of info about the case and had talked to several news outlets about the shocking claims. The school asked that Ricketson be removed from the case and the GBI complied and put other investigators on the case.

Alpha Kappa Alpha sorority also sent in their own investigators and the sorority’s activities have been suspended pending the outcome.

“Members cannot serve as a representative or spokesperson and cannot represent yourself in any manner as a member of Alpha Kappa Alpha Sorority, Incorporated,” wrote the Regional Director, Sharon Brown Harriot.

Alecia Johnson was the graduate advisor of the school’s Alpha Beta chapter of the AKA sorority, according to her online profiles.

So as of now, there is no official confirmation that the investigation is about hazing or sexual abuse claims—only that there is an ongoing investigation into sexual misconduct.

While social media is buzzing with talk about the scandalous allegations involving the well-respected sorority, AKA officials are taking these claims seriously and say they have launched their own independent investigation.

“We were appalled to learn of allegations of sexual misconduct against a Fort Valley State University employee who also is a graduate member of the sorority. These allegations are in no way representative of Alpha Kappa Alpha Sorority’s 110-year service-based mission or its nearly 300,000 members,” a statement said. “We condemn these allegations in the strongest possible terms. We remain dedicated to our mission to encourage high scholastic and ethical standards, promote unity, alleviate problems concerning girls and women, create opportunities for them to pursue higher education and be of service to millions of people around the world annually.”

The University put out this statement about how the investigation kicked off:

“On April 5, 2018, administrators from Fort Valley State University received two separate reports of alleged wrongdoing. One report was made anonymously as a tip on a campus complaint hotline. The second report was made separately by an employee to the campus Title IX coordinator. The USG in conjunction with FVSU began an immediate investigation in accordance with its policies.”