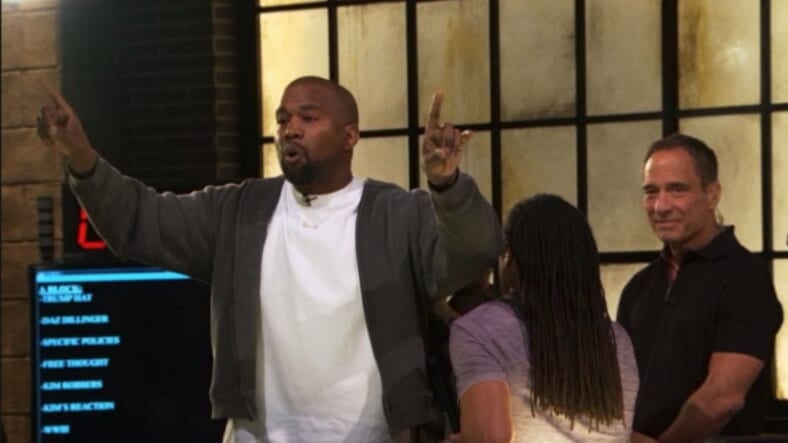 If you thought Kanye West being Donald Trump’s butt-kissing sycophant was bad – hold his beer.

In an explosive interview with TMZ Live, West appeared with conservative commentator Candace Owens and talked about his provocative comments from why he chose to wear a MAGA-hat to his reflections on free-thought. But West took things South with a thoughtless comment saying that slavery was a choice, and starting a firestorm on social media.

Slavery was a choice? Sooooo… when Africans were captured, taken from their land, brutally beaten, raped, killed, mutilated, stripped from their families and sold for back-breaking labor it was a choice?

West went off the rails and challenged people in the TMZ newsroom about his offensive comment by yelling:

TMZ reporter Van Lathan took that as a cue to step up and decimate West by shutting his slavery comment down.

And that’s when things got really intense.

“I think what you’re doing right now is actually the absence of thought. And the reason why I feel like that is because Kanye, you’re entitled to your opinion. You’re entitled to believe what you want.

“There is fact and real world, real life consequence behind everything you just said…and while you are making music and being an artist and living a life you’ve earned by being a genius the rest of us in society have to deal with these threats to our lives. We have to deal with the marginalization…from the 400 years of slavery that you said for our people was a choice. And frankly I’m disappointed, I’m appalled and brother I am unbelievably hurt by the fact that you have morphed into something to me,” Lathan said as West stood and quietly absorbed every word.

Lathan’s diatribe has since gone viral with many cheering him on for his truthful comment.

While it seemed like what Lathan said might sink in to West, he later took to Twitter to try to clean up his comments only to start reopen the wounds.

“[T]o make myself clear. Of course I know that slaves did not get shackled and put on a boat by free will. My point is for us to have stayed in that position even though the numbers were on our side means that we were mentally enslaved.”

And he STILL doesn’t get it.

“[T]he reason why I brought up the 400 years point is because we can’t be mentally imprisoned for another 400 years. We need free thought now. Even the statement was an example of free thought. It was just an idea. [O]nce again I am being attacked for presenting new ideas.”

“We need to save Travis $cott from the Kardashians before it’s too late, look at what they did to #Kanye #kanyewest#SlaveryWasAChoice” said user Afromatic_.

We need to save Travis $cott from the Kardashians before it’s too late, look at what they did to #Kanye #kanyewest #SlaveryWasAChoice

Master: Would you like to take part in slavery?
Slave: No . Hard pass on that.
Master: Are you sure? Think of the benefits….#IfSlaveryWereAChoice pic.twitter.com/6oUmKsGkTt

Me when another slave tells me we’re running away tonight. #IfSlaveryWereAChoice pic.twitter.com/BwG7XaCecd

#IfSlaveryWereAChoice
Me when massa raises his whip at me pic.twitter.com/I62UXeaQDs

Me when earn I my promotion from field negro to house negro because one of the House negros got auctioned off #IfSlaveryWereAChoice pic.twitter.com/W8REXkxBYw

Pulling up my 401k quarterly report to make sure massa matched my contribution #IfSlaveryWereAChoice pic.twitter.com/8xxW0E1u3D

Me, showing up at the big house on my own schedule #IfSlaveryWasAChoice pic.twitter.com/yxru9XI4zF

Another commenter, Zakithi_ said he’s cancelling any connection to West.

I just strolled onto these streets and saw this #slaverywasachoice nonsense. I take it personally it’s like saying apartheid was a choice. This fool is cancelled even if he produced your song I’m done. About to even go delete songs that feature him.

So West, where do we go from here because this is a mess.

—Surgeon says Kanye West can’t use his photo for album cover: ‘Don’t put my picture out there and claim you are about love’—