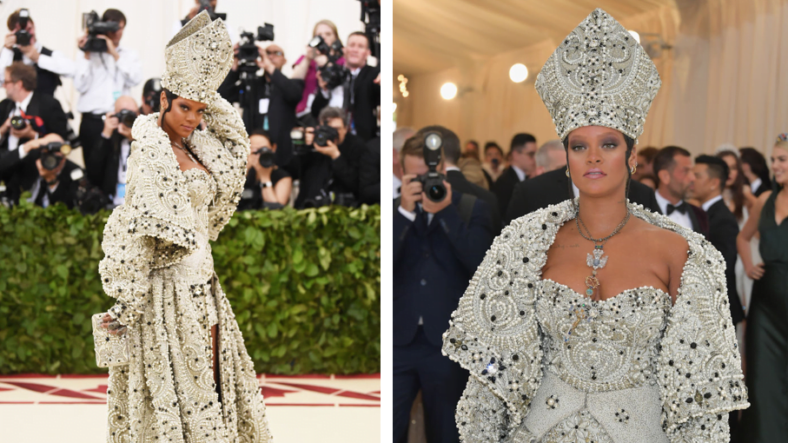 For fashion’s biggest night, the stars came out in full force at the invitation of legendary Vogue editor-in chief Anna Wintour and gala co-host Rihanna.

The theme of the Metropolitan Museum of Art’s Costume Institute exhibit is, “Heavenly Bodies: Fashion and the Catholic Imagination.”

According to Harper’s Bazaar, the “Heavenly Bodies” exhibition even received the official stamp of approval from the Vatican. The groundbreaking exhibit will feature over 150 designer pieces and will also include 50 garments and accessories loaned from the Vatican. Other brands featured include Dolce & Gabbana, Versace, both of which have a history of using religious undertones in their designs, and Chanel and Valentino.

And Rihanna’s look for the evening certainly set the tone for a magical night.

She wore a papal mitre (a ceremonial head-dress of bishops) and a jeweled strapless mini dress with a matching collared robe. Flawless!

And the Twitterverse agreed.

White smoke seen pouring out of Vatican chimney as Rihanna hits the Met Gala runway, meaning she has replaced Francis as pontiff. pic.twitter.com/gxnlErEIeg

WELCOME TO THE CHURCH OF RIHANNA. COME. SHE SHALL BAPTIZE YOU IN BODY LAVA AND SIN. pic.twitter.com/xIvBunLnhO

Dressed like the female pope, Rihanna shut down the Met Gala 2018 as fabulously and fearlessly as only she can do.

According to the New York Times, she wore a white beaded Maison Margiela corset mini dress under a full skirt, with a beaded bishop’s hat to match. The outfit was perfectly accessorized with a pearl anklet and a bejeweled crucifix necklace. Rihanna’s hat, the Times reported, is reminiscent of the papal tiaras worn by popes from the medieval era until the mid-1960s. The hat was created by Stephen Jones millinery.

And she made quite an entrance.