WATCH: Diddy celebrates his mother at Vh-1 ‘Dear Mama’ show “My mother was a superhero” 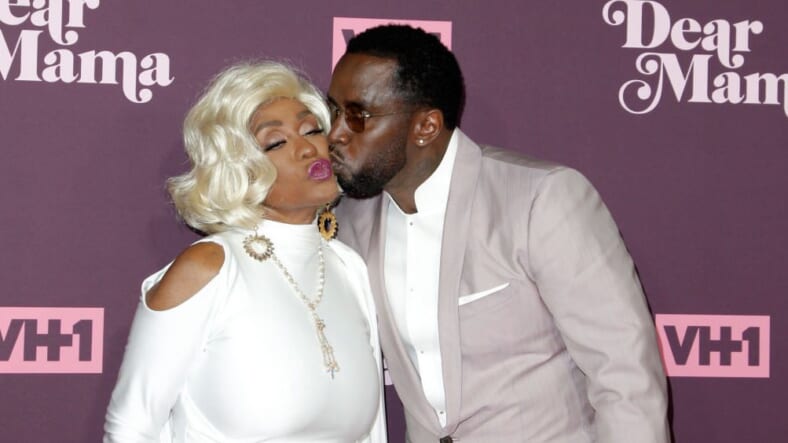 LOS ANGELES, CA - MAY 03: Sean Combs (R) and his mother attend VH1's 3rd annual 'Dear Mama: A Love Letter To Moms' screening at The Theatre at Ace Hotel on May 3, 2018 in Los Angeles, California. (Photo by Tibrina Hobson/Getty Images)

It’s not up for argument whether Sean “Diddy” Combs’ favorite girl is his mama.

During VH1’s Dear Mama event, the music mogul let the world know how much his mother Janice Combs, aka Mama Combs, has meant to him and how she largely influenced his life.

Diddy gave a heartfelt speech honoring his mom and her hustle – working four jobs to raise two kids as a single mother in NYC.

“My mother to me was a superhero,” Diddy tells the audience. “She sacrificed everything to make sure that we were well taken care of and that we received the best possible education. And that we would always have the opportunity to go on and be great. She taught me to believe in myself and trust in my dreams. She instilled in me the importance of family and the power of love.”

‘It had nothing to do with being Black’: Airbnb owner defends neighbor who called the police on Black guests

Diddy also shared a video of his kids paying homage to their grandma.

My mother to me was a superhero

“When I look at my children I see my mother. I see the continuation of our legacy,” he said in a video. “She raised me to be her King from day one and that’s how I raised my children to be kings and queens,” Combs said.

Combs also credited his momma with teaching him how to dance, how to dress and he said she taught him how to be fly.

Combs’ son Christian said: “Three words to describe my grandmother would be funny, kind and she’s got a log of swag.

Gabrielle Union also showed love to her mom Theresa who got a special serenade from singer Ne-Yo.

Union praised her mother for helping her to be an outspoken force and advocate for women. Union is a rape survivor and has outlined her personal experiences in her memoir, We’re Going to Need More Wine: Stories That Are Funny, Complicated, and True.

—VIDEO: Cop put on leave after cursing and threatening teen over loud music—