The actress pulled no punches with a joke about Kanye West. 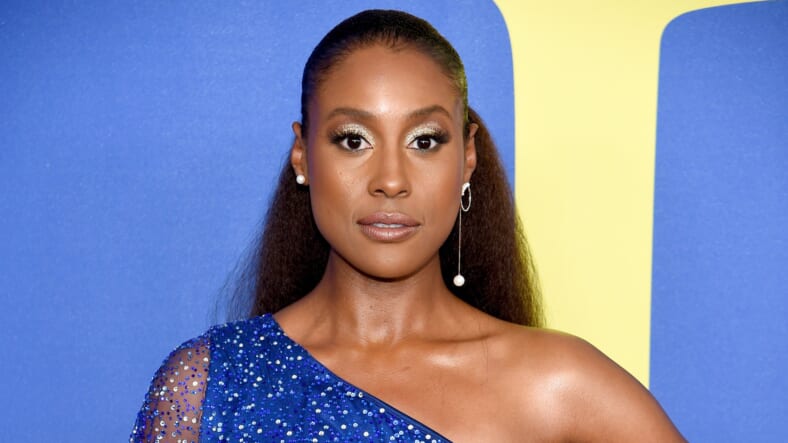 Issa Rae isn’t one to shy away from controversy and her outfit and her jokes at the CFDA Awards caused quite the stir on Monday night.

The Insecure star wore a blue, beaded gown to the big event that was created by designer Kerby Jean-Raymond for Pyer Moss.

“[It was] interesting and new for me because a lot of it was done via phone and pictures because of our work schedules…The sketching process was very fun,” the designer told PEOPLE.

“Comedically, she’s my spirit animal. It’s also very important because [the CFDAs are] in Brooklyn, a mile away from where I grew up.”

While the dress was stunning, it was Rae’s belt that got all the attention. It featured the words “Every n**** is a star” and was inspired by the Boris Gardiner song that played during Pyer Moss’ recent 2018 runway show.

The fashion statement wasn’t the only thing people were buzzing about. Issa Rae took the opportunity to throw some jabs at Kanye West.

“I’m about as fashionable as Kanye is black. Only when it’s convenient,” she said, according to USA Today. “That joke was my choice, just like slavery.”

“I’m the first person of color to ever host this so I really can’t (expletive) up, which is crazy especially considering the impact our culture has had on fashion,” she said, before praising designer Virgil Abloh “A man making clothes too expensive for everyone regardless of race,” she joked. “That is the future liberals want.”

Earlier in the day, Issa Rae treated fans to a sneak peek at season 3 of her hit HBO show, Insecure that featured her character chatting with her beloved friend, “Mirror B***h.”

Check out the hilarious clip:

Looks like our heroine is settling in to life with her new bag this season and we can’t wait to see what’s in store.

Issa Rae and the rest of the cast that includes Yvonne Orji, Jay Ellis, Lisa Joyce, Y’lan Noel, Natasha Rothwell and Amanda Seales will be back for season 3 of Insecure when it premieres on August 12 on HBO.