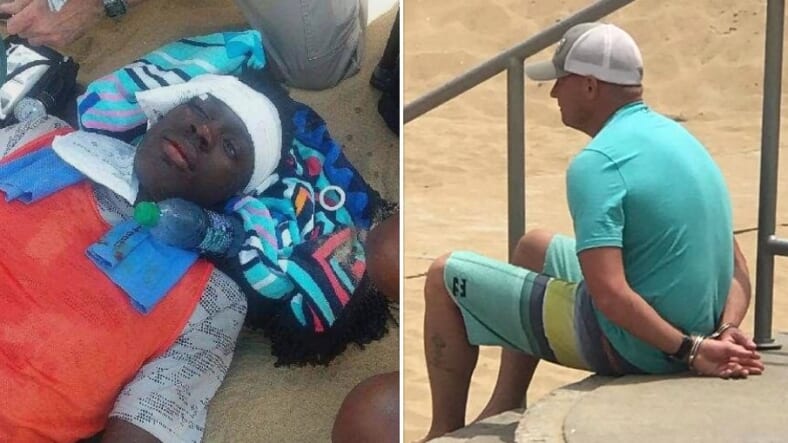 A Black teen in Virginia was punched in the face by the father of an opposing player at a soccer match, suffering a mild concussion and requiring stitches as the result of the attack, reports the U.K.’s Daily Mail.

The altercation took place on June 9 at Virginia Beach during the North American Sand Soccer Championship, which attracts over 10,000 players. The victim, Timothy Vickerie, 14, described the tournament to  Fox31 Denver. as “a fun weekend and something we look forward to.”

The championship match turned violent when two players got into a scuffle over the ball during play. Then, the situation took a turn for the worse when the opponent’s father, Jordan Grinnell, got involved. “They were grabbing each other and it was certainly getting grabby,” parent Jennifer Moss told Fox31. “Then, (Grinnell) punched (Vickerie) at least two to four times that I saw.”

Moss says she immediately called 911, adding “The next thing I knew, 10 other dads had to wrestle him down. I was shaking. It was so shocking. I was in such disbelief. I couldn’t believe what I saw.”

Vickerie was rushed to the hospital, where he was treated for a mild concussion and a gash above his left eye, according to Fox31.

“When I got to my son, he was bloody,” said the teen’s mother Sharonda Vickerie. “His right eye was completely swollen, he was kind of in a daze, shocked and confused by everything.”

Grinnell was arrested and charged with misdemeanor assault. He is expected to be arraigned on June 20.

“For 25 years, the North American Sand Soccer Championships has promoted a safe, fun and family friendly weekend of competition, attracting more than 200,000 participants over that time,” the organization said in a statement. “We take very seriously any acts of violence and condemn any bystander from entering the field of play. Our hearts go out to the victim in this unfortunate incident, and we want to assure everyone that we will redouble our efforts to make the 2019 tournament and all future ones even more safe and secure for our athletes, coaches, officials, parents and other visitors who attend this world class event.”