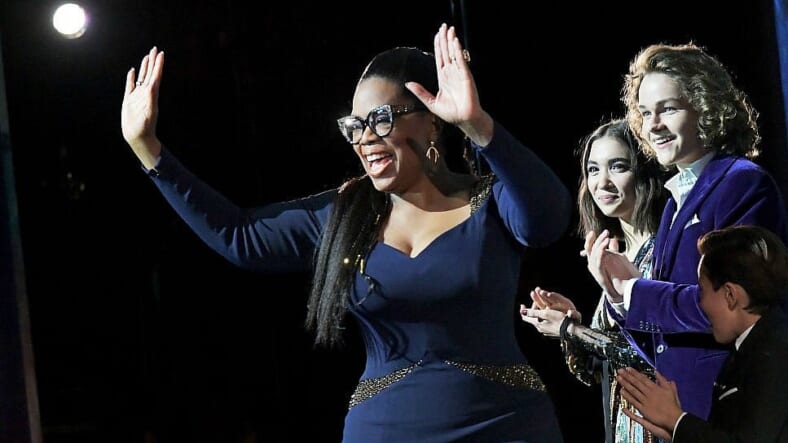 Actors Oprah Winfrey, Rowan Blanchard, and Levi Miller speak onstage at the world premiere of Disneys ‘A Wrinkle in Time’ at the El Capitan Theatre in Hollywood CA, Feburary 26, 2018. (Photo by Charley Gallay/Getty Images for Disney)

Oprah Winfrey’s got bank—literally—and has achieved another huge accomplishment by earning a top spot on the Bloomberg Billionaires Index.

The 64-year-old entertainment and media mogul reigns supreme as the first Black woman billionaire ever featured, reports the AJC. She joins as one of the 500 richest people in the world, along with Microsoft’s Bill Gates, and Facebook’s Mark Zuckerberg.

Just about anything Winfrey’s touches turn to gold. In recent years, she added Weight Watchers Ambassador to her lengthy resume and her boss bank account is all the better for it. Her fortune hit $4 billion this week because of her stake in Weight Watchers International Inc., according to Bloomberg.

And the television icon got her own special exhibit at the famed National Museum of African-American History and Culture (NMAAHC) recently, which will let visitors see how her life and career influenced American culture for more 30 years.

The exhibit, entitled, “Watching Oprah: The Oprah Winfrey Show and American Culture,” opens this Friday and will run through June 2019.

And just when you thought Oprah and Apple could not possibly earn more money here comes another announcement about a major merger that could reap another few billion.

Media mogul Oprah Winfrey and tech giant Apple have signed a multi-year partnership to create programs that will become part of a lineup of original content from Apple, Variety reports.

The announcement marks another notch in Winfrey’s expensive designer belt. She already owns the cable network OWN, home to the haunting New Orleans-based drama Queen Sugar. OWN, the Oprah Winfrey Network, launched in 2011 from a partnership with Discovery Communications.

Winfrey is one of 65 women on the list out of 500. So, there’s definitely room for more women to make their mark.

Take a look at the full index here.