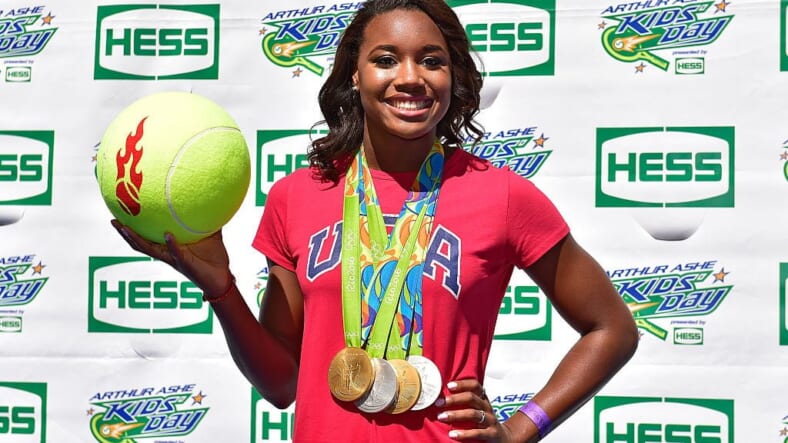 NEW YORK, NY - AUGUST 27: Simone Manuel, Olympic Swimmer of the United States poses for a photo on the red carpet during Arhut Ashe Kids' Day prior to the start of the 2016 US Open at USTA Billie Jean King National Tennis Center on August 27, 2016 in New York City. (Photo by Steven Ryan/Getty Images)

On Monday night, Simone Manuel was all smiles as the Olympic champion secured the Honda Cup for collegiate woman athlete of the year.

“Wow. So honored and humbled to stand alongside the best of the best in college athletics. What an empowering weekend recognizing 15 hardworking, resilient, and inspiring women. Thank you so much to @CWSA_HondaCup!!” she tweeted.

Manuel became the first African-American woman to win an individual swimming gold at the Olympics when she tied Canada’s Penny Oleksiak for the gold in Rio de Janeiro, reports USA Today. With this win, she maintaining her winning streak. Manuel made history at Stanford too, since this is only the second time the University has had back to back winners after Katie Ledecky won last year.

“Congratulations to Simone on being named the 2018 Honda Cup winner and having her name etched in the Honda Cup family forever,” CWSA executive director Chris Voelz said in a statement.

“Simone claims the Honda Cup from among an impressive class of candidates, all of whose performances are noteworthy. Her dominant year ranks as the ‘best of the best’ as she joins an elite group of collegiate athletes who have been recognized throughout the past 42 years.”

Manuel was also on the first ever Olympic USA Women’s Swim Team to have two African Americans compete. The Texas native continued to speak on what it is like to be in a sport that doesn’t have many African-American women.

“The title of black swimmer suggests that I am not supposed to win golds or break records, but that’s not true because I train hard and want to win just like everyone else.”

Even with all the black girl magic she exudes, Manuel spoke about the difficulties she face being a champion.

“It is something I’ve definitely struggled with a lot,” Manuel said. “Coming into the race I tried to take weight of the black community off my shoulders. It’s something I carry with me. I want to be an inspiration, but I would like there to be a day when it is not ‘Simone the black swimmer.’