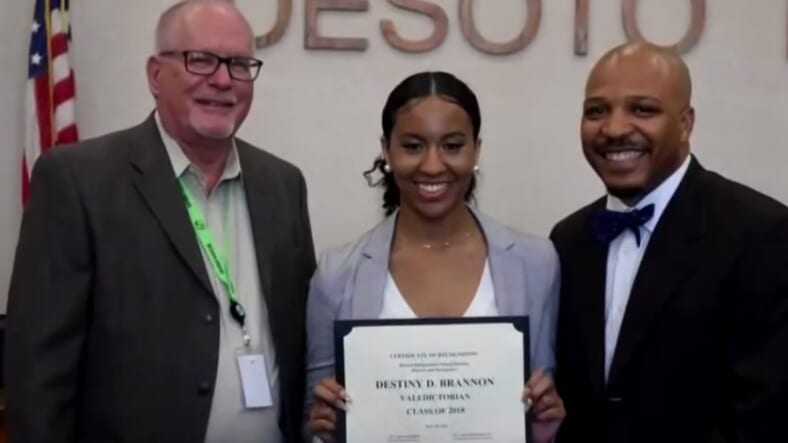 Destiny Brannon was so proud of the fact that she earned bragging rights for being at the top of her class at DeSoto High School in Texas but her joy turned to sorrow when the school said she ultimately wasn’t the 2018 valedictorian.

Brannon gave a critical graduation speech and believes now she is being punished by being bumped from first to third place in ranking, a move that will affect her college scholarship, the Dallas News reports.

Brannon’s mom Samantha Johnson-Brannon, who works as a secretary in the counselor’s office at DeSoto High School, said she thinks it was a ploy to punish her daughter for making the graduation speech about “subpar teachers who honestly weren’t there to benefit the needs of DeSoto students.”

“It’s embarrassing, because I got so much publicity from them on being valedictorian, only to be told that’s a mistake,” Destiny said.

While DeSoto ISD officials blame the mistake on a grade calculation hiccup, Brannon’s parents argue that they purposely changed her rank because of the criticism, the Dallas News reports.

The school claims they made the error by calculating Brannon’s final rankings on grades from the fall semester, not the spring. When the final transcript numbers were run, the glaring mistake was uncovered, administrators said.

The number 4 ranked student, Brian Uzuegbunam, was moved to the top spot. Brannon, who was set to receive free tuition because she earned the top spot as valedictorian, learned about the mistake after attending freshman orientation at the University of Texas at Austin.

In a statement, DeSoto ISD said that it “regrets that it failed to ensure that systems were in place to prevent this from occurring, but has since worked diligently to ensure that those at fault have been held accountable and that there is a system and process in place to verify student academic ranking as based on grades, grade point average and course weighting.”

READ MORE: Black Man ‘Hunted Down Like An Animal’ and Killed By Georgia Cop, Lawyer Claims

Then-principal Arista Owens-McGowan and the school board approved Brannon’s speech which also criticized the school for putting athletics above academics.

“DeSoto ISD is plagued with the idea that sports are somehow more important than education,” Destiny said during her speech.

The district’s spokeswoman said the “recalibrated rankings are in no way a form of retribution or in response to Brannon’s address.”

Brannon was set to attend UT-Austin on free tuition but now her family is trying to figure out how to pay tuition and have set up a GoFundMe page.