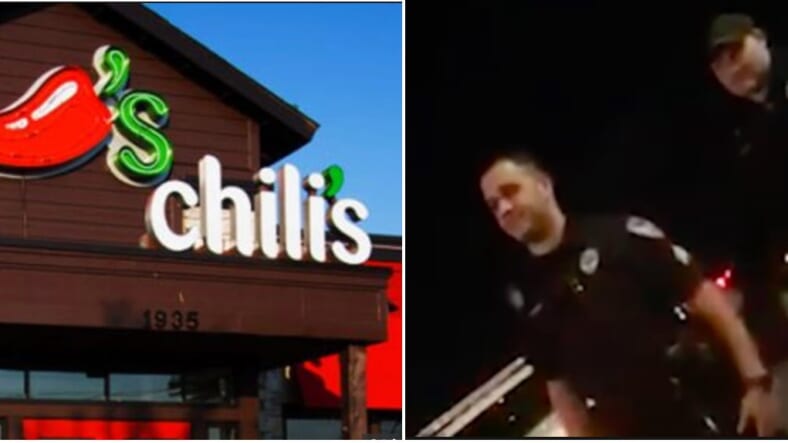 A group of Black folks who had just finished enjoying a meal at a Louisiana Chili’s restaurant, took their conversation to the parking lot and were about to leave when the police rolled up and ordered them to move along for simply standing and chatting.

Do we need to say it? This is yet another tiring and never-ending episode of Black folks having the cops called on them for breathing, drinking, eating, looking, lounging, mowing – and simply just being black.

The viral video caught fire on social media and now has the restaurant chain scrambling to ease tensions. The officers were caught on camera confronting the patrons who had just finished their meal and still had their to-go plates in their hands.

” … We were racially profiled and marked as threats because we are Black,” patron Jhodi Henderson wrote on his Facebook page.

“You can spend your money at chili’s if you want, but my black a– works too hard to give chili’s another dollar after being treated the way I was.”

There were at least a dozen people in the group who were talking outside the Chili’s restaurant in Abbeville, La. Laura Briggs, who was a part of the group, took the video and said they were told that staff members wanted them off the property since the restaurant was about to close.

“All we’re doing is talking,” one man explains. “Why? Cause we’re Black and we’re talking?”

The police then said since the restaurant was on private property they have free reign to decide “who they do and don’t want in there.”

Group members went back and forth with police explaining they were non-threatening and just finishing up their conversations.

“We’re just sitting out here talking to our friend, she came from Honduras,” a man stated on the video.

“All we’re doing is talking. My homeboy in there, he came out and told me, ‘They think you’re trying to intimidate somebody.’ Why? Because we’re Black and we’re talking? They just had some white ladies (out here) talking.”

“When walking into our restaurants each day, we believe our ChiliHeads have one job and that’s to make every guest feel special while dining with us. We know and regret that the experience for some of our Chili’s Abbeville guests on Saturday, June 23 did not reflect this.

“Our focus now is to talk with our guests to better understand how they were treated at Chili’s Abbeville and learn how we can better live out our promise to ensure every guest feels welcome in our restaurants. We have reached out to the Abbeville guests for whom we have contact information and offered to sit down and discuss their experiences. While they have declined at this time, our doors are always open.

“Our restaurants can be found in communities big and small across the country, and our team members and guests come from all backgrounds. We are proud to be a meeting place in the communities where we live and serve and do not tolerate discrimination of any kind. Cultural intelligence and unconscious bias coaching sessions are part of our ongoing training for all ChiliHeads because we want to ensure every guest feels special, respected and valued in our restaurants.”