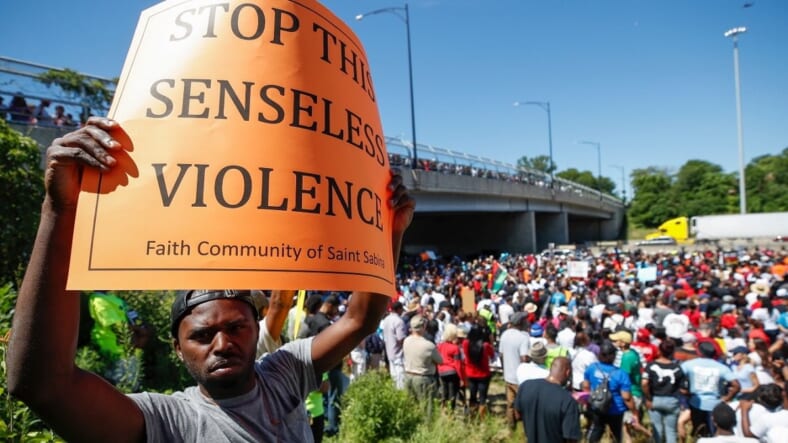 CHICAGO, IL – JULY 07: An activist holds a sign during march along Chicago Dan Ryan Expressway to protest violence in the city on July 7, 2018 in Chicago, Illinois. Anti-violence protesters aimed to shut down the northbound lanes of the major interstate in an effort to press public officials to address common sense gun laws, joblessness and access to quality education. (Photo by Kamil Krzaczynski/Getty Images)

As promised, thousands of anti-gun violence protesters crammed onto the Dan Ryan Expressway in Chicago and shut it down, carrying signs and chanting “Stop the killing” to protest the city’s gun violence epidemic and demand change, reports the Chicago Tribune. After a brief, tense standoff with state police the marchers were joined by Chicago’s top cop for a while. No arrests were reported.

Led by Father Michael Pfleger of St. Sabina Catholic Church in Chicago, the anti-violence protesters brought traffic to a crawl, as police officials tried to dissuade the protest leader, and the Rev. Jesse Jackson from entering onto the busy the Interstate 94.

But the march pressed onto the northbound lanes and protesters and law enforcement engaged in an hour-long stand-off as the Illinois State Police threatened arrest and tried to prevent pedestrians from entering the expressway.

Protesters continued walking northbound along a roughly 1.5-mile route. Chicago Police Superintendent Eddie Johnson, who is African American, joined the march and walked arm-in-arm with Rev. Jackson. Some protestors carried the signs: “NO MORE DRUG WAR” and “NO GUNS,” with an illustration of a handgun crossed out. Another sign read “They Don’t Care About Us.”

Chicago had 650 homicides in 2017, the most in the nation, according to USA Today. And as the weather gets warmer, gun violence has reportedly been on the rise in the city. So far, Chicago has had 252 homicides and 1,100 shootings in the first six months of this year. Gun violence has disproportionately affected the city’s black communities.

“Today we got their attention,” Pfleger said after the march.

Pfleger said his next move is to sit down and discuss an “aggressive plan” to deal with the growing gun violence in the city. Protesters also called for jobs and resources and a plan to improve schools.