EYEROLL: Here’s why Kylie Jenner is on the cover of FORBES + Nene Leakes weighs in

The youngest member of the KarJenner clan may be the family's most successful sister. 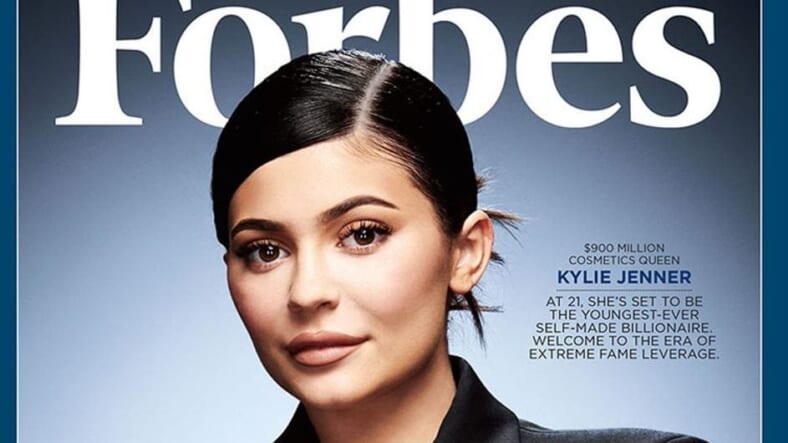 Kylie Jenner is gracing the cover of FORBES and the money magazine is singing her praises for being the youngest “self-made” billionaire in the business.

We’re throwing major side-eye at the enormous reach that would constitute the cosmetics guru as self-made, but her rise to the top of the food chain is still pretty impressive.

According to Forbes, Jenner’s beauty brand, Kylie Cosmetics is worth $800 million and she is well on her way from crossing the billion-dollar mark thanks to her uber-successful, $29 lip kits that launched in 2016.

The 20-year-old owns 100% of her company, making her the sole beneficiary of its success. Forbes accounted for the millions she earned from TV stints and endorsements for brands like Puma and PacSun clothing, and $60 million in estimated after-tax dividends from her company, estimating her net worth at $900 million, making her the youngest person on the annual ranking of America’s Richest Self-Made Women.

The math may add up, but the term “self made” is a stretch to say the least considering she has spent most of her life starring in one of the most successful reality shows ever. She isn’t some college student who pooled her pennies for an initial investment in her business. She’s a reality star with a super famous family who used her modeling money to launch a beauty brand after receiving lip injections from a professional. Her plumped up lips undoubtedly helped her sell the lip kits that do NOT include the fillers responsible for her perfect pout.

Keke Palmer on Kylie Jenner: One can be ‘profitable for not being who you truly are’

Oddly enough, she has since decided to forego her regular lip injections and she’s starting to look more like her old-self just as her business is about to burst into the billions bracket.

We’re not the only ones who are surprised to see that Kylie Jenner is worth more than her infamous sisters including Kim Kardashian West and Khloe Kardashian.

Tons of folks are throwing shade at the idea, including Nene Leakes.

“Well some people get opportunities that others will never get! Just saying! This game ain’t fair!,” she posted on Instagram.